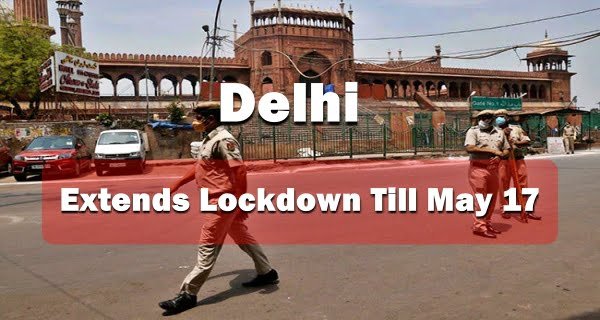 New Delhi: Delhi Chief Minister Arvind Kejriwal on Sunday announced to extend the lockdown till May 17 morning to control the further spread of coronavirus. Besides announcing a lockdown extension, he also issued a slew of strict restrictions for the national capital.

The Delhi government had been forced to impose lockdown amid a steep rise in Covid-19 cases on April 20. Although the cases have come down and the positivity rate has reduced from the high of 35 percent on April 26 to around 23 percent now, but strictness is needed, he said during a virtual address.

Here are some fresh guidelines issued by the Delhi Disaster Management Authority (DDMA):

Speaking on the ongoing vaccination drive in Delhi, he said inoculation is also going on at a fast pace although there is a lack of adequate vaccine stock. Over 1.29 lakh beneficiaries were vaccinated on Saturday, the highest since the inoculation drive began on January 16. Of these, 90,289 were those who got their first dose, according to a health bulletin by the Delhi government released on Sunday There are 86,232 active cases, including 52,263 in-home isolation. More than 14,500 people recuperated, taking the number of recoveries to 12.17 lakh, the bulletin stated.

Madras High Court took the Center by surprise, said- what was government doing for...

30/04/2021/10:55:am
Chennai: The Madras High Court has taken the Central Government by surprise for its alleged negligence in taking prompt action to curb the COVID-19...

Pentagon creates a microchip that detects corona, will filter out the blood and remove...

13/04/2021/11:29:am
Washington: Vaccination work is in full swing in many countries to prevent the spread of corona. Meanwhile, scientists at the Pentagon, the headquarters of...

Another action of RBI on banks, PNB, and BOI will have to pay a...