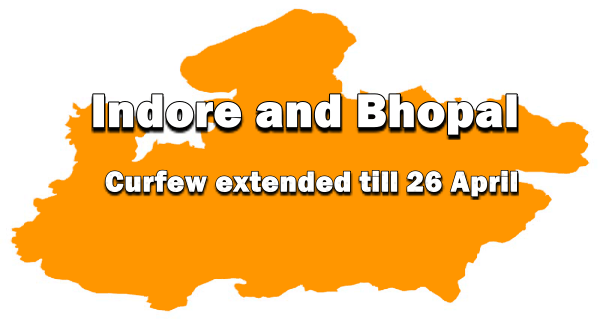 Bhopal: In view of the ever-increasing Corona infection in Madhya Pradesh, now the government has started to tighten. Due to this, curfew has now been extended till 26 April in Bhopal and Indore. During this time only government offices related to essential services will be opened. Apart from this, all government offices will also be closed. The curfew will remain till 6 am on 26 April. Apart from this, all services will be closed. According to Bhopal District collector Avinash Lavania, the curfew will be implemented with full strictness. He said that the goal is to reduce movement. The District President has also issued an order in this regard.

At the same time, it is feared that the number of infected patients in the state will soon touch one lakh. In such a situation, the Shivraj government has claimed that by April 30, 700 metric tons of oxygen will be available. The government claims that the government will get 445 MT by 20 April, 565 MT by 25 April, 700 MT of oxygen by 30 April.

The Shivraj government claims that oxygen has been provided locally as well. Under this, 293 oxygen concentrators have been installed in the districts. This amount of oxygen will be sufficient for patients by April. According to the claim, 350 MT of oxygen has been received 1 day earlier, while consumption has been 335 MT. Now the situation is normal in the state due to the supply of oxygen.

The government has also claimed to expand health services in hospitals in the state. The number of beds in the state is continuously increasing. The total number of beds in government and private hospitals has increased to 40 thousand 276. In Bhopal, arrangements are being made for 150 beds at Administration Academy, 300 at Hamidia Hospital, 300 at Viva and 500 beds at AIIMS. Yesterday, the 58-bed Narmada-Apna Hospital was opened in Chhatarpur. Now a total of 109 Covid Care Centers have been established in 50 districts of the state, in which 6 thousand 153 beds are available at present.

04/11/2020
Washington: Niraj Antani has become the first Indian-American to be elected to the Senate from Ohio. Antony defeated Democratic Party candidate Mark Fogel on...

07/01/2021
Colombo: Despite strong opposition from the minority Muslim community, the Health Minister of Sri Lanka on Thursday said that for those who died of...

11/07/2020
New Delhi: Google has banned such apps which used to cheat users. According to the new ad policy, now you will not show ad...

19/09/2020
Islamabad: Pakistan on Friday rejected India's demand to appoint an Indian lawyer or "Queens Counsel" in the case of Kulbhushan Jadhav. India on Thursday...