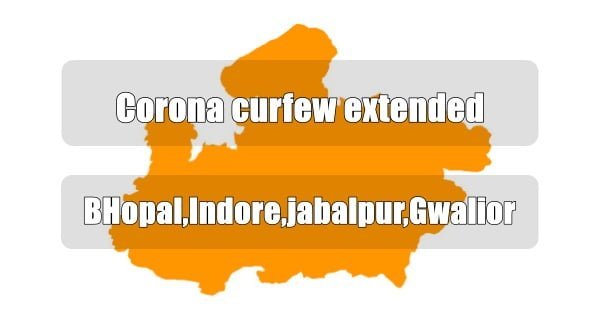 Janata curfew in Indore has been extended till 29 May. May 30 is a Sunday, that is, the Corona curfew will remain in effect until 6:00 am on May 31.

In the new order issued by Collector Manish Singh, the new arrangement of grocery shops has been implemented again. Now online delivery of groceries has also been allowed. Different days have also been set for the opening of wholesale and Kherchi grocery stores.

In Bhopal, Collector Avinash Lavania issued orders regarding the Corona curfew on Sunday afternoon. The order said that the Corona curfew has been increased till May 24 in the Bhopal Municipal Corporation area and Berasia municipality area. In Bhopal, curfew has been extended till 24 May (6 am) to prevent the rising corona infection and common people from corona infection. Strict action will be taken against those who violate the curfew under Section 188.

Transition rate decreased in Jabalpur
At the same time, a virtual meeting was held in Jabalpur under the chairmanship of MP Rakesh Singh. In the meeting, a proposal to increase the corona curfew to 31 was sent to the state government, which was approved. Significantly, in the last 18 days, the rate of infection in the district has come down from 29 percent to 11 percent. The recovery rate has also increased from 78 percent to 89. The meeting also discussed the confusion surrounding vaccination in rural areas.
Our priority is to drive away Corona – CM

Here, on the other hand, in Gwalior, a meeting of the Corona of Gwalior-Chambal division and the meeting of the Crisis Management Group was held under the chairmanship of Chief Minister Shivraj Singh Chauhan. In the meeting, it was decided to increase the Janata Corona curfew by 30 May in the Gwalior district. The Chief Minister said that defeating Corona is the top priority of the state government. We will defeat Corona with everyone’s common efforts. The Chief Minister called on this occasion to forget all differences in this hour of crisis and become a Corona warrior and participate in the elimination of Corona.

Bioentech hopes their vaccine will be effective against Corona’s redesign

23/12/2020/10:11:am
Berlin: Germany-based pharmaceutical company BioNTech has expressed confidence that its vaccine (Vaccine) that protects against the Coronavirus is also effective against the new form...

UN emphasizes Buddha’s message of solidarity and service to others on the occasion of...

03/07/2020/7:44:pm
United Nations: UN Secretary-General Antonio Guterres emphasized Lord Buddha's message of solidarity and service to others, saying that only with global cooperation can all...