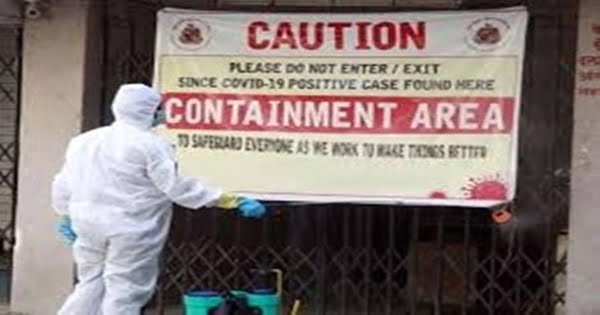 Bhopal: In Madhya Pradesh, the scope of the containment zone to be built to prevent corona infection will now be only three houses. Its duration will also not be 21 days. After the Corona Positive Case comes to the fore, a house will be made on each side of the concerned’s house by mixing it. After the first survey, the second will be five days later. If no other corona-positive case comes to light, then the Containment Zone will be opened.

The district administration will decide according to the local circumstances in the matter of creating a container zone for dense settlement. Home and Health Minister Dr. Narottam Mishra said that the subject of redefining the Containment Zone had come up in a meeting with the Divisional Commissioner and Collectors. It was considered that why a large population is affected for 21 days if a person gets corona infected. It was agreed that this period should be reduced. It was considered that now the Containment Zone should be kept up to three houses. Each house should be included on either side of the affected’s house. Five days after the first survey, if a corona positive case does not appear in the second survey, then the Containment Zone should be opened.

In the meeting, Chief Minister Shivraj Singh Chouhan instructed all the collectors that the businessmen should be compulsorily registered by Thursday to get loans up to ten thousand rupees from banks. The Municipal Corporation, Municipality and Municipal Council have been included in the Central Government’s plan.

Dr. Mishra said that the Chief Minister has decided that the state government will provide loans from banks on its guarantee to those who do business by running a contract in small towns of the state.

IG will monitor the cases of looting, snatching

The law and order issue was also discussed in the meeting. It was revealed that after unlocking, there have been complaints of crimes like robbery and snatching on the highway. Home Minister Dr. Narottam Mishra said that action has been taken in 98 percent of cases. It has now been decided that an Inspector General of Police (IG) will supervise these cases every day and report to the police headquarters along with the Home Minister. Instructions have also been given to the officials that law and order is the first priority of the government. This type of incident should not happen. Full control should be kept on fights, gangs etc.

09/09/2020/9:13:pm
Beijing: The Foreign Ministry of China said on Wednesday that Australian agents raided the home of four journalists working for the Chinese state media...

24/04/2021/11:22:am
Alirajpur: Congress MLA Kalawati Bhuria from Jobat constituency of Alirajpur district died of corona infection. She was admitted to the hospital in Indore for...

20/05/2022/8:36:pm
Mumbai: A new trailer of Bollywood actor Ayushmann Khurrana's upcoming film 'Anek' has been released. In the video, the actors are held captive by...

Biden gave a big blow to Trump as soon as he became president, reversing...

21/01/2021/10:37:pm
Washington: After a lot of political upheaval, finally a new government has been formed in America. Democrat Joe Biden was sworn in as America's...