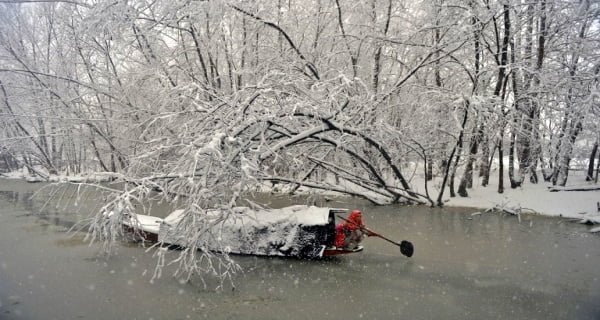 Srinagar: The cold wave intensified in Kashmir with the minimum temperature dropping across the valley to stay several notches below the freezing point on Sunday. The weather has remained dry and cold across Kashmir since the snowfall on December 12, with the night temperature staying several degrees below the freezing point, the officials of the Meteorological (MeT) Department said.

The MeT office has forecast light rain or snow in the Kashmir Valley over the next three days. The officials said Srinagar the summer capital of Jammu and Kashmir recorded a low of minus 5.2 degrees Celsius down from the previous night’s minus 3.7 degrees Celsius.

Kashmir is currently under the grip of ‘Chillai-Kalan’ — the 40-day harshest winter period when a cold wave grips the region and the temperature drops considerably leading to the freezing of water bodies, including the famous Dal Lake here as well as the water supply lines in several parts of the valley. The chances of snowfall are most frequent and maximum during this period and most areas, especially in the higher reaches, receive heavy snowfall, the officials said.

After the apps, the government has also banned China’s website

17/09/2020
New Delhi: After the government of India (Indian Government) banned the apps of China (China), today has given another blow. The Department of Telecommunication...

Break on 3 agricultural laws after three and a half months

12/01/2021
New Delhi: The applications challenging the three new farm laws of the Modi government were heard in the Supreme Court on Tuesday for the...

15/09/2020
Jaipur: The Ashok Gehlot government in Rajasthan, affected by the Corona infection (COVID-19), has provided great relief to the common man. Giving relief to...