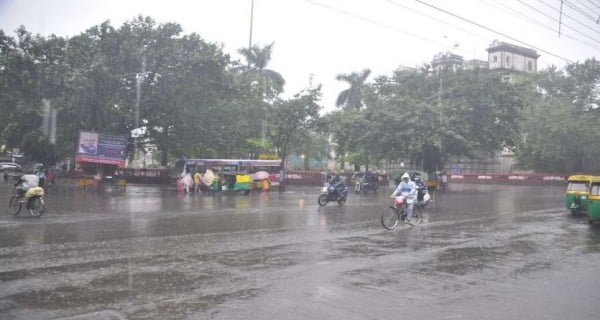 Indore: With the onset of monsoon in Kerala on June 3, Madhya Pradesh including Indore will see a period of rain. According to meteorologists, Indore will see good rains in the first week of June. On Sunday, there was a nice sunny day in Indore, but by the evening there was cloudy and a light drizzle was also seen in some areas of the city.

There is a possibility of light drizzle in Indore on Monday as well. However, there will be good rains in the remaining districts of the Indore division in the next two to three days. There will be cloudy and light winds in Indore. According to the meteorologists of the meteorological center at Bhopal, the western disturbance is currently over North Pakistan.

Trough line is formed from Punjab to Rajasthan and a cyclonic circle is formed over the eastern Arabian Sea. Apart from this, a trough remained from East Uttar Pradesh to East Madhya Pradesh and Vidarbha. Due to these conditions, more quantity of moisture is coming from the Arabian Sea in the state including Indore.

On June 2, there will be a Western Disturbance over Afghanistan. Due to this, there is a possibility of rain in Indore from the night of 2 June. The same will see good rains in Indore from June 3. On Sunday, the maximum temperature in the city was recorded at 39 degrees, two notches below normal. The same minimum temperature was recorded one degree below normal at 24.6 degrees.

26/02/2021/8:40:pm
Mumbai: The vehicle, which was found parked with explosives on Thursday, was stolen last week near the residence of industrialist Mukesh Ambani. A letter...

An ancient temple found in a mountain in Pakistan, was built 1300 years ago...

20/11/2020/10:33:pm
Peshawar: A 1,300-year-old Hindu temple has been discovered by Pakistani and Italian archaeologists in a mountain in the Swat district of northwest Pakistan. This temple...