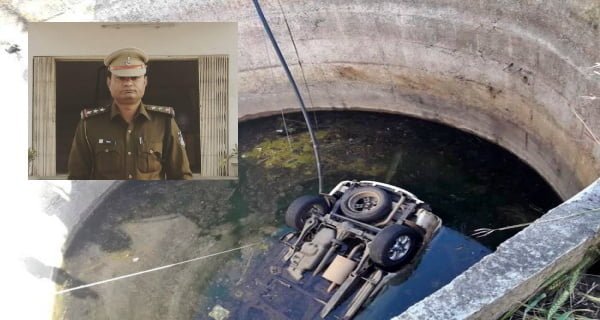 Seoni(MP): The vehicle of Chhapara police station in-charge Nilesh Paratei, returning from the Scorpio on Friday and Saturday night at Pauri village under Bandol police station in Seoni district, fell into the well of the farm located at a distance from the road along with a constable. In the accident, Police Inspector Nilesh Paratei (40) and constable Chandkumar Chaudhary (38), who were driving the vehicle, died on the spot in Chhapara police station of the Scorpio riding in the vehicle. SP Kumar Prateek said that after this tragic accident, the police administration has given financial assistance of Rs 1 lakh each to the family of both the deceased. Besides, arrangements are being made to deliver the body of Nilesh Perteti, in-charge of Chhapara police station, to Chhindwara. His last rites will be held in Chhindwara.

According to the information, the station in-charge and a constable riding in the Scorpio vehicle were returning from the Kanhwada area last night via Kalarbanki-Bundol to the police station, Chhapara. Kalarbanki – The car fell uncontrolled and collapsed in a nearby well after colliding with a transformer installed on the roadside field near Pauri village between Bandol. Chhapara police station in-charge Nilesh Paratei and constable Chandkumar Chaudhary died on the spot along with a Scorpio in a well filled with water. The villagers, who reached the farm between 6 and 7 am on Saturday, 27 February, informed the police after seeing the accident mark and the Scorpio vehicle fell in the well.

As soon as the information was received, top officials including the Bundol police station reached the spot. Bodies and accidental Scorpio vehicles have been taken out of the well. The bodies have been sent for post-mortem at the district hospital. The police department is shocked by this accident. Ti Nilesh Paratei was a resident of the Chhindwara district. For the past two years, Parateeti Chhapara police station was in charge. At the same time, constable Chandkumar Chaudhary is said to be originally a resident of Bakhari village in the district, who had been living with the family in Balaghat district for the past several years.

The dead bodies have been taken out of the well and sent for post-mortem. The crashed Scorpio vehicle has been lifted from the well with the help of a crane. Investigation in the case is being done after the merger has been established. How the accident happened is being investigated. – Dilip Pancheshwar, Station Incharge Bundol

09/12/2020
Apple has launched its first over ear headphones AirPods Max. The company has priced this premium headphone at Rs 59,900 and it has been...

26/03/2021
London: Suspend teacher for showing 'inappropriate' cartoon of Prophet Mohammed in a class by a teacher in a school in the Midlands region of...

11/09/2020
New Delhi: According to the news that is coming now, India has now thought of deploying Bofors cannons on the border, under which now...