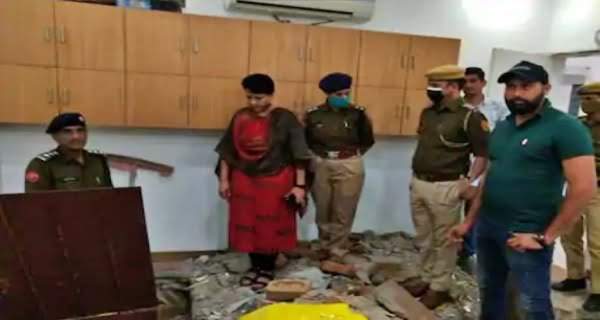 Jaipur: A unique theft was revealed in Vaishali Nagar police station area of ​​Jaipur, the capital of Rajasthan. The thieves have carried out a big theft incident in the house of the city’s famous hair plant specialist, Dr. Sunit Soni, by constructing a 20 feet long tunnel. The thieves cleared their hands on the crores of silver kept hidden in three boxes in the basement. How vicious the thieves are, it can be gauged from the fact that the miscreants bought a house behind the doctor for Rs 90 lakh to carry out the crime. Then by digging the room of this house, a tunnel was built to reach the basement of Soni’s house. The incident came to light when two days before Sony saw in his basement that the silver boxes were missing. After this, he lodged a complaint with the police on theft on Friday.

When the police investigated, it came to light that a floor in a room in the purchased house located behind Sunit Soni’s house was dug up and tunneled to the basement of Soni’s house. About three months ago, the doctor couple buried them in the basement of their house by filling them with silver in three boxes under the ground and after that, the floor was fixed to the top. But the thieves got information about it. The thieves made a plan to reach the basement. For this, tunneling was necessary, so they bought a house in the neighborhood and then started building the tunnel.
Reached the basement through the tunnel and stole the silver

The thieves reached the basement through the tunnel and dug the floor and took out the three silver boxes. Then paved the floor and covered it from the top so that no one is suspicious. He also closed the mouth of the tunnel. Silver is said to be around 400 kg. However, the doctor Sunit Soni filed an FIR with the police, saying only that the jewels have gone missing. There is no mention of how much silver was in the boxes.
Doctor Sunit Soni is a hair plant specialist

Dr. Sunit Soni is a famous hair transplant specialist from Jaipur. The police has started the investigation only after taking stock of the basement. The thieves are being searched. Actually, the house from which the tunnel was built behind Sony, on January 4, this house was bought by a person for 90 lakhs. Now it is feared that this house was bought for the purpose of this theft of silver.

ACP Raisingh Beniwal told that there is a possibility of two or three more people joining this gang. Only those close to the doctor can join it, because they knew very well that there is a silver box in the basement of the house and where it is kept. At the same time, the police has also taken some suspects in custody in this whole case, the police claim that the whole case will be revealed soon.

30/10/2020
United Nations: On the occasion of the 20th anniversary of the resolution calling for equal participation of women in peace talks, the head of...

27/10/2020
Bengaluru: The Indian Institute of Management (IIM) is a postgraduate program of Bengaluru in the list of top 100 global courses. IIM Bengaluru's Postgraduate Program...

Chinese citizens stole important data of US and Indian government by cyber attack: US

17/09/2020
Washington: The US Department of Justice has accused five Chinese citizens of stealing data and business information by cyber attacks on more than 100...

18/03/2021
New Delhi: The good news for home buyers is that the prices of houses and flats have come down. Indeed, India ranked 56th globally...

04/09/2020
Mumbai: Capital market regulator SEBI has made drastic changes in the rules of share purchase and sale from September 1, 2020, in the name...