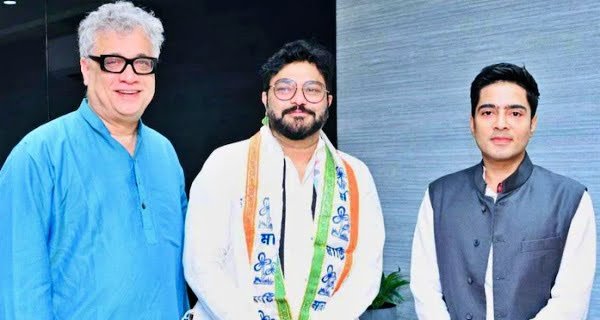 New Delhi: According to big news, now BJP’s strong leader Babul Supriyo has joined TMC. Recently, he had left the BJP. Yes, in West Bengal, BJP has now got another big setback. MP Babul Supriyo, who was once a cabinet minister in the Modi government, has joined TMC today. Recently he had resigned from BJP a few days back. Today he has joined the Trinamool Congress in the presence of TMC MPs Abhishek Banerjee and Derek O’Brien.

Significantly, BJP MP from Asansol in West Bengal and famous singer Babul Supriyo had earlier announced his retirement from politics. He had also been a Union Minister. Not only this, on 7 July, just before the change and expansion in the Modi Council of Ministers, he had to resign from the post of minister. But he had suddenly said goodbye to politics.

Not only this, but he also announced this in a Facebook post. However, why did this man, a two-time Union minister, suddenly become ‘disillusioned’ with politics at first and then rejoined? This is also a questionable question at the moment.

However, he later said that “I had some intimate differences with the BJP party. Those things had come in front of everyone even before the election. I also take responsibility for the defeat, but other leaders are also responsible.”

28/07/2020/10:43:am
New Delhi: A high-level team of Israeli researchers, developing a rapid test kit to test the coronavirus along with India, arrived here on Monday....

In MP, not the public, now councilors will choose mayor and...

Launch of the country’s first sea-plane service, know the fare and...

Cold rises in Kashmir, minimum temperature in Pahalgam is minus 4.7...