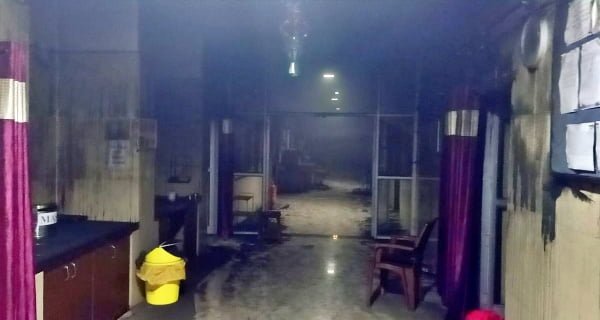 Bhandara: According to a traumatic incident, 10 newborns (children) have died due to a fire in Bhandara district hospital in Maharashtra. According to the received reports, 10 newborn children have died tragically due to a fire in a government hospital here. According to the district hospital’s civil surgeon Dr. Pramod Khandate, 17 newborns were kept in the children’s ward. Late Saturday night when a nurse was seen emitting smoke from this ward. After which it came to know about this accident. Here, Maharashtra CM Uddhav Thackrey has ordered a thorough investigation into the incident.

According to the incident, the Sick Newborn Care Unit (SNCU) caught fire in the district hospital late night due to short circuit. There were a total of 17 children in this ward. Seeing the smoke coming out, the nurses and the people of the hospital rushed to the ward. But by then 10 innocent newborns had died. It is being told that the same children are kept in this ward, whose condition is critical, whose weight is also very low.

If we look at the sequence of events, 10 newborns died due to fire in the special neonatal care unit in the district hospital late on Friday night. The doctors gave this information. A doctor reported that the newborns were between one month and three months old. District Civil Surgeon Pramod Khandate said that a fire broke out at Bhandara District Hospital around 1.30 pm on Friday. The unit had 17 children, seven of whom were rescued.

On seeing the smoke rising in the SNCU, the nurse on duty opened the door of the ward and immediately after seeing the situation, the hospital authorities reported. After which the fire brigade, who arrived on the spot, started the rescue operation with the help of the people present in the hospital, in which somehow 7 children were rescued.

Here, Khandate also told that in the ward where the children are kept, there is a constant need for oxygen supply. “There were fire extinguishers and personnel tried to extinguish them,” he said. There was a lot of smoke. ” He informed that the parents of the children who have been victims of the fire have been informed and seven children rescued have been sent to the second ward. He informed that patients from ICU ward, dialysis and labor ward have been sent to another ward safely. The cause behind the fire has not been ascertained yet, but a short circuit is suspected.

Here, CM of Maharashtra Uddhav Thackrey also talked to Health Minister Rajesh Tope and District Collector and Superintendent of Police of Bhandara district about the incident regarding the fire in the district hospital. Along with this, he has also ordered the necessary intensive investigation.

Between about half past two o’clock in the night, 10 children have died due to fire in the Sick Newborn Care Unit (SNCU) and we have rescued 7 children. A detailed investigation will be done in the case and the cause of the incident will be ascertained: Sandeep Kadam, District Collector, Bhandara

Here, Prime Minister Modi and Home Minister Amit Shah have expressed grief and sorrow over this heartbreaking and painful incident. On the other hand, Maharashtra’s Health Minister Rajesh Tope said that in the event of fire in Bhandara district hospital, the families of the deceased will be given an ex-gratia amount of Rs 5 lakh.

The newborns who died in this incident have a weeping condition of their relatives. A huge crowd of people has gathered outside the hospital. Now people are also demanding a thorough investigation into the fire incident. At the same time, many people are calling it a hospital’s negligence. The hospital administration and fire brigade were still engaged in their rescue operation till the news was written.

Major Fire At Kolkata Slum, Blaze Under Control After 4hrs

19/06/2020
New Delhi: Today is the 50th birthday of former Congress President Rahul Gandhi . Rahul Gandhi has decided not to celebrate his birthday this...

18/11/2020
London: A new 'Respirator Mask' developed by a team of British researchers has proved effective in clinical trials by bearded doctors on Covid-19 Duty...

Before Diwali, gold prices fell the most in 7 years, silver fell 7 percent

10/11/2020
Mumbai: The good news about the coronavirus vaccine has led to a sharp fall in gold prices internationally. According to the news agency Reuters,...

From December 1, 80 crore ration cardholders will not get free foodgrains

28/11/2020
New Delhi: Since the time of Lockdown due to the Coronavirus pandemic, 80 crore ration cardholders of the country have been getting free under...