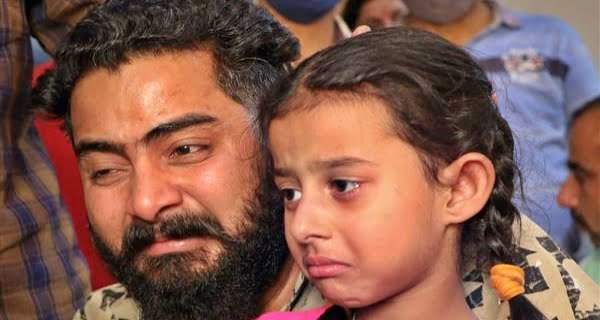 Raipur: In the police-Naxalite encounter that took place under the police station Naxalite encounter of Bijapur in Chhattisgarh, 22 soldiers were killed, one is still missing. While the jawan who disappeared during the Naxalite attack is in the possession of the Maoists. The Naxalites said that no harm has been done to the jawan taken in possession. The jawan has been identified as Rakeshwar Singh Manhas, who is from CRPF. Meanwhile, the young man’s five-year-old daughter has made a very emotional appeal to the Naxalites. Raghavi, the daughter of the young Rakeshwar Singh Manhas, said, ‘Papa’s fairy is missing Papa a lot. I love my dad so much Please send Naxal Uncle my father home.

Not only this, when the daughter of the young Rakeshwar Singh Manhas made this appeal, her tears were coming out while everyone present on the occasion was moist. Apart from this, Akash, a seven-year-old nephew of the jawan, is also inquiring about his uncle. Meanwhile, he asked the media persons present on the occasion, ‘Uncle you are in the media, you will know where my uncle is.’

There was a talk five days ago: Meenu Manhas (young man’s wife)
Meenu Manhas, the wife of the young Rakeshwar Singh Manhas, told News18 that she had spoken to her husband five days ago. He said that he is going for the operation right now and will return and call. Ever since I heard the news of the encounter, I am not only upset but I am constantly calling on their number, but no response has been received. According to Meenu Manhas, when she made a call to her husband’s partner, then his disappearance came to know. Together they told that on Monday afternoon they received a call from an unknown number, in which the jawan was said to be in possession of the Maoists. The caller has described himself as a local journalist of Bijapur. According to Meenu Manhas, the journalist had asked me to send a video to appeal to the Maoists for the release of the jawan, which I have sent. Although I am amazed how the person sitting in Bijapur got my number. This is the subject of investigation. Apart from this, the jawan’s wife appealed to PM Narendra Modi and said, “Get my husband back, if he is safe, bring him back. Bring my husband back just as Abhinandan was brought back from Pakistan.” ‘
75-year-old mother also appealed

Kunti Devi, 75-year-old mother of CRPF jawan Rakeshwar Singh Manhas, has expressed hope that the government will talk to the naxalites for the release of my son and he will soon be released. With this, he said that my husband was also in CRPF and he has also sacrificed for the country. While my son also joined CRPF after being inspired by his father. Meanwhile, the CRPF has assured the release of the jawan.

Economy and Health, crisis in America due to failed policies of Trump administration:...

17/10/2020
Maken (US): Vice Presidential candidate Kamala Harris on behalf of the Democratic Party has said that due to the failed policies of the US...

07/09/2020
Agra: The district administration has decided to open the monuments in Agra (Agra) in Uttar Pradesh from 21 September under Unlock 4.0. In this...

First case of new strain of coronavirus in America, kept in isolation

30/12/2020
Denver: The first case of Coronavirus infection in the US has been reported in Colorado. State Governor Jared Polis has confirmed this. The redesign...

India emerges as the most attractive global market for clean energy: PM

10/07/2020
New Delhi: Prime Minister Narendra Modi has said that India has emerged as the most attractive global market for clean energy as well as...

20/09/2020
Washington: US President Donald Trump will nominate a female candidate for the vacant position after the death of Ruth Bader Ginsburg of the Supreme...