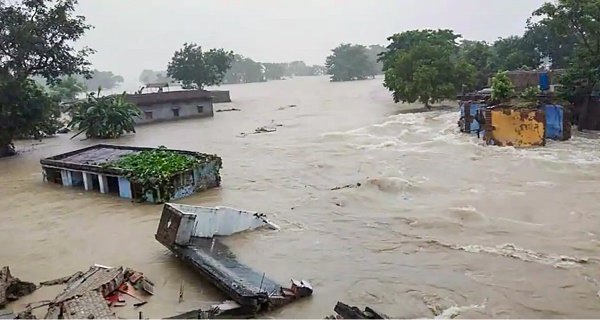 Amravati: The main rail and road links connecting the state to the south and east were snapped on Sunday due to the devastation caused by the flooding of the Penna river in Andhra Pradesh. Chennai-Kolkata National Highway-16 in SPS Nellore district had to be closed for traffic after the road at Padugupadu was submerged. At least 17 express trains on the Chennai-Vijayawada route had to be canceled due to floodwaters on railway tracks at Padugupadu. Three more trains were partially canceled or diverted.

The state’s disaster management authority said over two lakh cusecs of floodwater flowed from the Somasila reservoir in SPS Nellore district, submerging the area. National Highway-16 at Kovuru has also been blocked due to this. Following this, traffic on NH-16 between Nellore and Vijayawada was suspended, leaving hundreds of vehicles stuck for several kilometers. Hundreds of passengers got stuck at the Nellore RTS bus station as bus services were disrupted. The vehicles coming from Srikalahasti were stopped at the Tottembedu check post and diverted via Pamuru and Darsi, officials said.

A bridge over Papagni river in Kadapa district collapsed at Kamalapuram, cutting off road connectivity between Kadapa and Anantapuramu districts. He said the bridge collapsed due to floods from Veligallu reservoir. A three-story building collapsed in Kadapa town in the early hours of Sunday but there were no casualties as the people living in it came out safely minutes before the incident. The mother and a child trapped on the second floor were rescued by the police and firefighters.

04/10/2021/10:17:pm
New Delhi: Social media sites Facebook, WhatsApp, and Instagram service are reported to be down globally, due to which users are facing a lot...

20/05/2021/9:50:pm
New Delhi: The central government on Thursday said the shortage of Amphotericin B, a drug used to treat black fungus or mucormycosis patients, will...