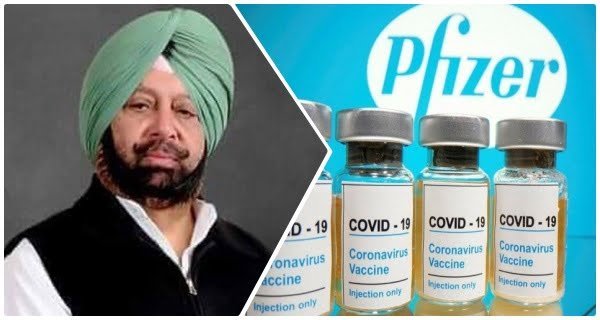 Chandigarh: After Moderna, now Povizer Covid vaccine manufacturer, has also refused to give vaccines directly to Punjab Government. Pfizer also says that under the policy, they can negotiate only with the Government of India. However, the company has also appreciated the efforts of the Punjab Government.

The company said that they only deal with federal governments. State Nodal Officer for Vaccination and Senior IAS Officer Vikas Garg reported that ‘Pfizer’ said in its response, “Pfizer is working with federal governments around the world to use the Covid-19 vaccine for use in national immunization We could supply. Right now our supply agreements are with national governments and super-national organizations. Pfizer has followed this approach around the world. “

The Nodal Officer further stated that various Covid vaccines including Sputnik V, Pfizer, Moderna, and Johnson & Johnson from all vaccine manufacturers are in place to explore the possibility of issuing global tenders as per the instructions of the Chief Minister Captain Amarinder Singh. He said the state is still expecting a positive response from Sputnik and Johnson & Johnson.

He said that the state government was forced to stop vaccinations for the Phase 1 and Phase 2 categories in the last three days due to the non-availability of vaccines. Also, all efforts will be made to procure vaccines to meet the acute shortage of vaccines in the state. Punjab has received about 45.3 lakh vaccine doses so far from the Government of India. Significantly, on Sunday, the Moderna company refused to have direct talks with the Punjab government about vaccines.

02/07/2020/5:29:pm
Bhopal: Governor Mrs. Anandi Ben Patel administered the oath of office and secrecy to the ministers. The cabinet expansion oath-taking program was held at...

No withdrawal of US Army from Afghanistan at the moment, Biden ruled out the...

26/03/2021/9:47:pm
Washington: America's President Joe Biden has ruled out the possibility of the withdrawal of all his soldiers from Afghanistan by May 1. This was...