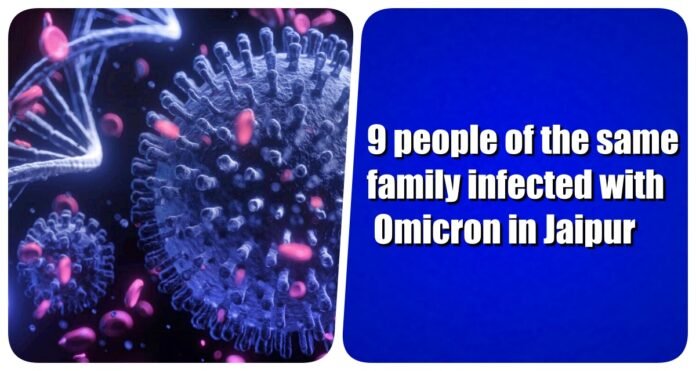 Jaipur: The cases of Omicron variants of coronavirus are increasing rapidly in India. On Sunday, the Omicron variant has been confirmed in 9 people in Rajasthan’s capital Jaipur. Genome sequencing report of a total of 9 people including 4 people from the same family of Jaipur and their relatives has come positive. According to the information, the Omicron variant of South Africa has been confirmed in 9 samples from Jaipur. Of these, 4 people had returned from South Africa. The other 5 were in contact with him. Treatment of all is going on. The condition of all is said to be normal.

The number of patients infected with Omicron increased to 21 across the country
After the arrival of 9 new cases of Omicron in Jaipur, the total number of infected people in the country has gone up to 21. Earlier on Sunday evening itself, a total of 8 cases of Omicron have been reported in Maharashtra. The Omicron variant has been confirmed in 6 people of the same family in Pune, Maharashtra. One each in Delhi-Gujarat and 2 cases from Karnataka has come to the fore.

New guideline issued for international passengers
In view of the increasing cases of Omicron in India, the central government has issued a new guideline for international passengers. The central government has included Britain, South Africa, Brazil, Botswana, China, Mauritius, New Zealand, Zimbabwe, Singapore, Hong Kong, and Israel in the list of ‘at-risk countries’.

13/09/2020/9:17:am
Karachi: Four people, including two women and a minor, were killed and eight others injured when a fire broke out in a three-story building...

Britain tells its citizens to stay away from Kabul airport, fears of terrorist attack

26/08/2021/9:57:am
London: The UK government has asked its citizens in Afghanistan to stay away from the airport, expressing the possibility of a terrorist attack on...