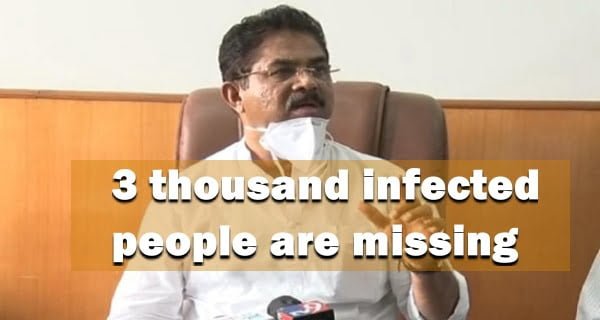 Bengaluru: Recently, a new crisis has come in front of the Karnataka government, which announced the lockdown. In a report, it is being claimed that 3 thousand infected people are missing in the capital Bengaluru. Not only this, but contact numbers are also coming off to these missing people. In such a situation, it has become difficult for the administration to locate the missing infected. Police have been asked to search people here.

According to a report in India Today, 3,000 people infected with the Coronavirus are missing in Bengaluru city. The government has ordered the police to apprehend them. State Revenue Minister R Ashok has claimed that these missing people are spreading the disease. In Karnataka too, the number of Covid-19 patients continues to increase.

On Wednesday, 39 thousand 047 new cases of infection and 229 deaths have been registered in the state. This is the largest single-day figure in Karnataka. At the same time, a total of 22 thousand 596 infected people were found in Bengaluru. Minister Ashok has informed that the police have been asked to trace these missing people. At the same time, the police are silent on their strategy to find these people.

State Health Minister Dr. K Sudhakar has said that the case of the disappearance of people has been going on for the last year. He said, ‘We are giving free medicines to the people, which can control 90 percent of the cases. But they have switched off their mobile phones. Ashok said that most of the infected people have kept their phones closed and are not letting people know about their hideouts. He told that things are getting more difficult due to this. He said, ‘I think that in Bangalore at least 2 to 3 thousand people have switched off their phones and left home. We do not know where they went.

The minister is appealing with folded hands
Ashok is appealing to the infected to start his phone. He said, ‘I pray with folded hands that Covid’s affairs will increase with such behavior. It is wrong when you find an ICU bed at the last minute. The Health Minister said, “At least 20 percent of the patients are not answering our calls … the police will find them in their own way.” At present, the state government has announced a 14-day lockdown. These restrictions have started from Tuesday.

High Court: If married in other religion then even family members cannot interfere in married life

12/03/2021/10:11:pm
Nagpur: In view of the increasing cases of Corona virus, there are preparations for lockdown in Nagpur. On Thursday, Maharashtra Chief Minister Uddhav Thackeray...

After raiding Twitter’s office, company said – we are worried for employees

27/05/2021/3:39:pm
New Delhi: Twitter has given a clarification for the first time after raiding the office in connection with an alleged 'toolkit' created by Congress...

29/07/2020/8:08:pm
Lucknow: Just before the Bhoomi Pujan program for the Ram temple in Ayodhya, the Sunni Central Waqf Board has also formed a trust for...

India will keep a close watch on the movements of China-Pakistan, real-time monitoring from...