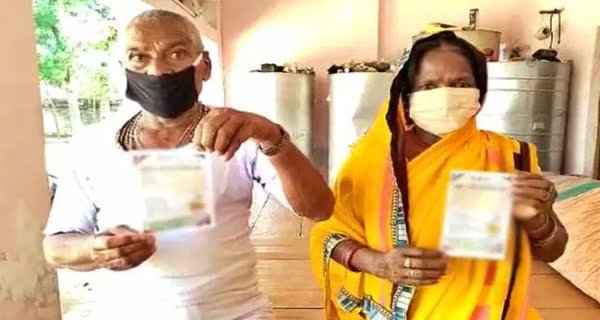 Siddharthnagar: In a case of medical negligence reported from Siddharthnagar district of Uttar Pradesh, 20 villagers were administered a dose of Covaxin after the first dose of Covishield. The Chief Medical Officer of the district has ordered a probe in the entire episode and has assured action against those who will be found guilty of laxity.

The incident was reported from Badhni Primary Health Care Centre where around 20 people from Audahi Kalan were given Covishiled as their first dose of vaccine but on May 14 they were administered a second dose and were inoculated with Covaxin by the health workers. However, all the people who got a ‘cocktail’ of vaccines are doing fine at the moment.

Speaking to media, CMO Siddharthnagar, Sandeep Chaudhary said, “there are no such guidelines from the government of India on any kind of ‘cocktail’ of vaccines and hence this is a matter of negligence. The person who is getting the first dose of a particular vaccine should get the second dose of the same vaccine as well. An enquiry was ordered in this case and our senior officers went to the spot and conducted enquiry. On the basis of which clarification has been asked from people who have been named in the enquiry report. After this proper action will be taken against those who will be found guilty.”

“Our team had gone to the spot and spoken to all the people who were administered a second dose of a different vaccine, all of them are fit and fine and are not facing any health issues at the moment. However we will keep an eye on the entire situation,” added CMO Siddharthnagar.

Meanwhile, a villager named Ramsurat resident of Audahi Kalan village said, “I was given the first dose of Covishield on April 1, 2021 while the second dose was given on May 14 which was covaxin. When I went for the second dose, nobody was bothered to see which vaccine I had got as my first dose, the staff was busy with their own things. I was given Covaxin instead of Covishield. I am fit at the moment but there is a fear that there is something wrong inside my body. No one till now has come to me to enquire about the issue. Total 20 people were given the wrong vaccine.”

31/12/2020/10:15:pm
Buenos Aires: Despite Pope Francis' objections, Argentina has become the largest country in Latin America to legalize abortion. It is being described as the...

If there is a jam, you will not have to pay the toll! Transport...

Citibank will close its consumer banking business in India, know the reason

Three elephants were found dead in the forest of Chhattisgarh, one was pregnant

11/06/2020/8:27:pm
Raipur: Another wild elephant was found dead on Thursday in the Surguja area of ​​Chhattisgarh. Three elephants have died in this area in the...