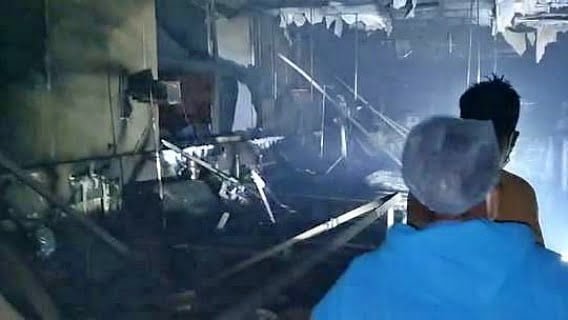 Virar: 13 patients suffering from Covid-19 were killed in a fire in a hospital in Virar in Palghar district in Maharashtra early Friday. According to police, the fire broke out in the hospital’s ICU (intensive care unit) at 3 am. On the whole incident, Vijay Vallabh Covid Hospital official Dr Dilip Shah said that a sudden fire fell from the AC at 3 o’clock in the night. 13 patients have died due to fire in ICU. Serious patients have been shifted to another hospital.

Vivekananda Kadam, head of the district’s Disaster Control Center, told PTI that there was an explosion in the ICU’s air conditioning unit before the fire broke out. Kadam reported that 16 patients were undergoing treatment at the hospital. On the other hand, Maharashtra Chief Minister Uddhav Thackeray has ordered an inquiry into the fire incident at Vijay Vallabh Kovid Hospital in Virar.

Uddhav Thackeray has ordered an inquiry into the fire incident

He said that the fire brigade of Vasai Virar Municipal Corporation had put the fire under control in an hour. Two days earlier, 22 Covid-19 patients died after oxygen supply was disrupted at a hospital in Nashik in Maharashtra.

At the same time, the fire department says that 17 patients were being treated in the ICU of the hospital, but a huge fire broke out from the short circuit at three in the morning. The fire has been overcome after hard work.

07/10/2020
Mumbai: Bollywood actress Rhea Chakraborty was arrested by the NCB on 8 September in Drugs related to Sushant Singh Rajput Death Case. After which,...

farmers became rich in the same season through Black wheat, huge demand for it

01/07/2020
Dhar(MP): Vinod Chauhan of village Sirsauda in Dhar district of Madhya Pradesh has suddenly become rich. That too in the same season of rabi...