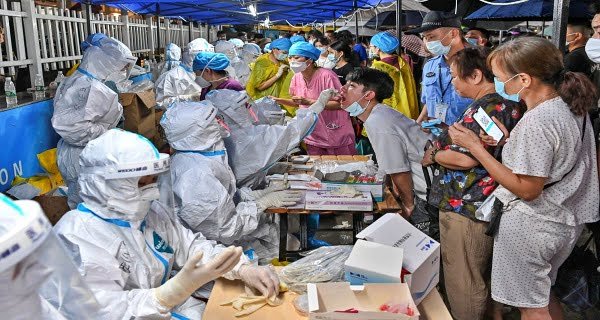 Beijing: Hundreds of flights have been suddenly canceled in many cities and provinces of northern China. Schools have been locked. These orders have been given on Thursday after a group of tourists suspected of spreading the new COVID-19 outbreak. The government has also issued a decree to conduct large-scale testing. The capital Beijing has closed the borders and imposed a lockdown in some areas under the zero-covid policy.

By the way, the case of local infection in China was almost suppressed. But cases are increasing continuously in the northern and north-western regions of the country. The link of this new infection case is related to an elderly couple. who was part of a group of tourists? He was on a visit to Shanghai, Xi’an, Gansu Province, and Inner Mongolia. In his journey, cases of infection are coming from many areas. He had come in contact with many people in about five provinces and regions, including the capital Beijing.

After this disclosure, the local authorities of many cities have announced to conduct large-scale testing. All picnic spots, tourist spots, schools, cinema houses have been closed. The strict lockdown has been imposed in many areas. In some regions and in Lanzhou, a city with a population of 40 lakhs, people have been ordered not to leave the house. Those who want to go out will have to show their negative report. At the same time, airports were also closed, due to which hundreds of flights were canceled.

A notice has been published in Inner Mongolia that there is a ban on movement in the city. The Global Times has written that due to the outbreak in Inner Mangalia, coal imports may be banned, due to which the power crisis in China may deepen.

Indian Muslims are most satisfied in the world: Mohan Bhagwat

10/10/2020/10:24:am
New Delhi: Sarsanghchalak Mohan Bhagwat of Rashtriya Swayamsevak Sangh has said that Indian Muslims are the most satisfied in the world and some kind...

Sadak 2 leaked on the internet as soon as the release

Before US presidential election, Facebook will take steps to remove misinformation

03/09/2020/10:46:pm
Washington: There are two months left for Presidential Elections in the US, and Facebook has said that it is expected to inspire more voting,...