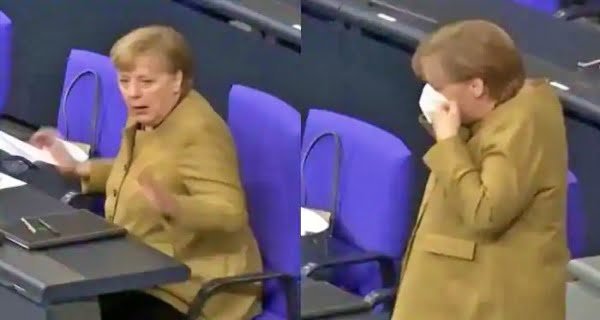 Germany: Coronavirus has caused havoc all over the world. In such a situation, everyone from the general public to the minister is forced to apply a mask on the mouth. In order to avoid a deadly epidemic, something similar happened in Germany, which everyone should take Sikh.

In fact, the German Chancellor Angela Merkel panicked while addressing a parliament session in Germany on Friday when she realized that she did not have a mask on her face. Actually, Merkel forgot her mask on the podium. After which, he panicked and ran to the podium.This video has been released by News AJC Reuters. The agency wrote in the caption of the released post, “Angela Merkel forgets her face mask on the podium after a speech.

As can be seen in the released video, Angela Merkel puts her files on the table (Angela Merkel Forgets Face Mask), realizing she has forgotten her mask on the podium. She was afraid of it. Shortly afterwards she ran to the podium and took off her mask. Another woman cleaned the mask and handed it to Angela Merkel. This video is becoming increasingly viral on social media. People are praising this responsible style of Merkel. So far, it has been viewed more than a million times and people are responding to it.

26/09/2020
Kiev: A military aircraft crashed in the Kharkiv region of Ukraine on Saturday. 25 people died in this accident. According to reports, the dead...

29/12/2020
Anurag Kashyap and Anil Kapoor's film AK Vs AK has been released on Netflix. The film is directed by Vikramaditya Motwani. Anil and Anurag...