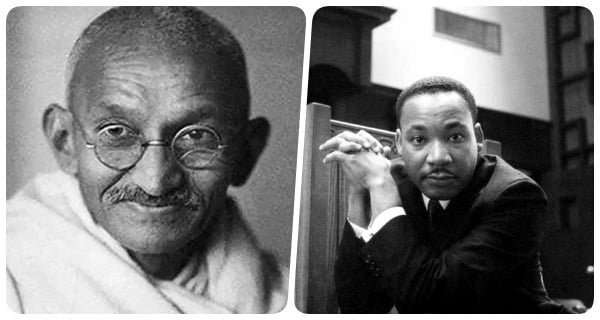 Washington: US President Donald Trump has approved the Gandhi-King Scholarly Exchange Initiative to enact legislation. This would pave the way for establishing an educational platform between the US and India to study the work and legacy of Mahatma Gandhi and Dr. Martin Luther King Jr. The law was written by civil rights advocate John Lewis and co-sponsor is Indian-American Congressman Amy Berra. Lewis died earlier this year. Under this law, there is a provision of $ 1 million every year till FY 2025 for the Gandhi-King Scholarly Exchange Initiative.

It makes a provision of $ 2 million for the fiscal year 2021 for the Gandhi-King Global Academy and $ 3 million in 2021 for the US-India Gandhi-King Development Foundation. The new law also authorizes the United States Agency for International Development (USAID) to establish the US-India Development Foundation, which will encourage the private sector to come forward in the area of ​​development priorities in India. The Development Foundation will receive $ 15 million every year from 2022 to 2025, but this amount will be available only if the Indian private sector commits to contribute as much as the contribution of the US government. The Congress Budget Office (CBA) has estimated that the bill would cost $ 5.1 million over five years. In 2009, late Congress member John Lewis led a Congress delegation to India to commemorate 50 years of Doctor King Jr.’s visit to India.

Lewis, a member of Congress, prepared the Gandhi-King Exchange Bill, which calls for the resolution of conflicts and the implementation of the philosophies of Gandhi and Dr. King Jr. in current policy challenges. The Act encompasses a number of things, including that the State Department has been authorized, in collaboration with the Government of India, to establish an annual educational forum for scholars from both countries focusing on the legacy of Gandhi and Dr. King Jr. It also states that professional development training initiatives for conflict resolution based on the principle of non-violence should be developed and a foundation should be established to set social, environmental and health priorities in India.

Confirmation of poison in an envelope at the White House address

20/09/2020
Washington: Federal authorities in the US have detected poison Poison ricin in an envelope at a White House address. An official gave this information...

01/06/2020
Humans have lost their connection with nature and self due to a runaway lifestyle. For this reason, many diseases and bereavements are born in...

24/06/2020
Mumbai: Famous choreographer Saroj Khan has bad news for her fans. Actually, Saroj Khan is admitted to the hospital in Mumbai. Saroj Khan was...

08/12/2020
Beijing: Air forces from China and Pakistan will conduct joint exercises. For this, a group of Chinese Air Force personnel has left for Pakistan. Giving...