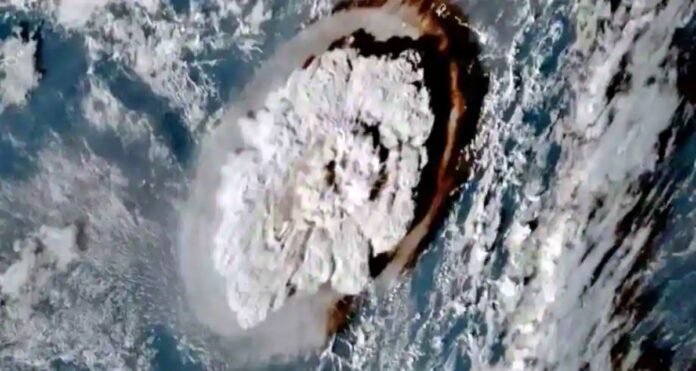 Wellington: Tonga issued a tsunami warning on Saturday after an underwater volcano erupted. Videos posted on social media showed huge waves crossing the shores in coastal areas. Tonga Meteorological Services said a tsunami warning has been issued for the whole of Tonga. Tonga’s Hunga Tonga Volcano erupted on Saturday as part of a series of volcanic eruptions on Hunga Hapai Island. A Twitter user by the name of Dr. Fakailoetonga Taumoefolau has shared a video in which the waves are seen breaking through the edges.

He wrote, “I can actually hear the sound of the volcano erupting, it sounds so fierce.” He wrote, “Ashes and small pebbles are raining down, the sky is dark.”

At the same time, officials in New Zealand, located more than 2,300 kilometers (1,400 mi) away, are warning of a storm due to the explosion. The National Emergency Management Agency said “strong and unusual waves could be accompanied by unexpected surges” off the coast in parts of New Zealand following a major volcanic eruption.

07/08/2020/2:00:pm
Israel has made a new claim amid the growing threat of the global pandemic Coronavirus. Israel has claimed that it has created a 'miracle'...

22/05/2021/9:40:am
Gaza City: Thousands of Palestinians celebrated on Friday after a ceasefire took effect in Gaza with Israel's declaration. Many of them said the war...

Corona vaccine in-country by November, Russia will give 100 million doses to India

16/09/2020/9:22:pm
New Delhi: coronavirus Good News. India is hopeful of getting the Corona vaccine by November. Russia will give 100 million doses of Corona vaccine...

After years of hard work, Hindu-Sikh community got a special place...

Pope Francis said- women can recite the Gospel in prayer but...