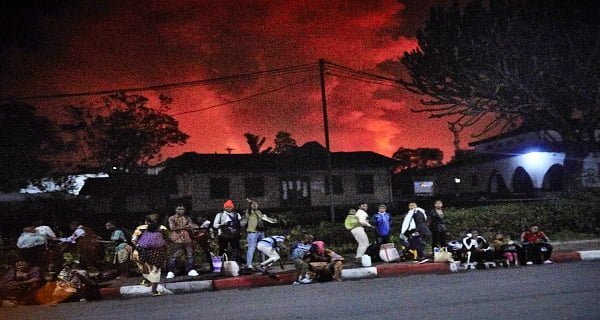 Goma (Congo): Volcano Erupts, located near Goma City in Congo, erupted on Mount Nyiragongo on Saturday, causing the entire sky to turn red and lava to flow into the streets. Due to volcanic eruptions, the people of the city were frightened and ran away from their homes. Witnesses say lava has been hit on a highway connecting Goma to another province. It is not yet clear how many people have died due to volcanic eruptions.

The locals alleged that the authorities had not given any order to leave the area in the wake of the volcano eruption. This volcano last erupted in 2002 when hundreds of people died here and lava reached all the runways of the airport. The United Nations peacekeeping mission tweeted a picture of the city after the volcano erupted. He said that he is keeping an eye on the area through his planes. The mission stated, “It does not appear that lava is moving towards the city of Goma, yet we are cautious.”

25 critically ill patients died due to lack of oxygen at Delhi’s Sir Gangaram...

Government changed rules for people coming from abroad, will be applicable from 8 August

02/08/2020/8:27:pm
New Delhi: The Ministry of Health and Family Welfare has released new guidelines for International Passengers coming from other countries on Sunday. These new...

29/04/2021/10:16:am
New Delhi: Corona infection is progressing rapidly in the country. Every day new corona patients are breaking records. The situation is that the beds...