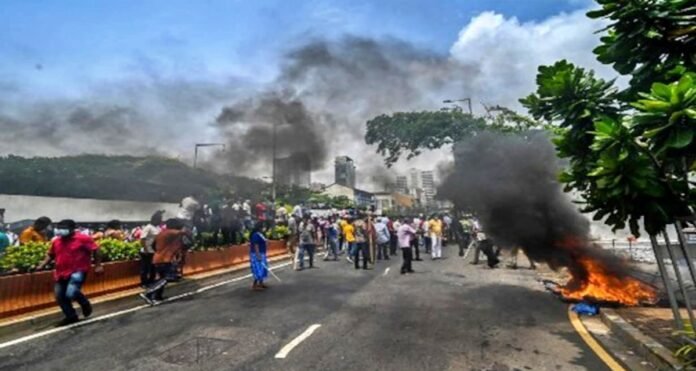 Colombo: Due to the very bad economic situation in Sri Lanka, a situation of civil war has arisen. On Monday, Prime Minister Mahinda Rajapaksa resigned under pressure from the opposition. After which violent incidents are happening everywhere. Bloody clashes are taking place on the streets between the supporters and opponents of the Rajapaksa family. So far 5 people, including the MP, have died in the violence of pro-anti-government.

The police have supported President Gotabaya Rajapaksa and his family. After that, the situation got worse. The army had to be called. Common people started attacking the ruling party’s MPs and ministers besides other leaders. An MP allegedly committed suicide to escape the crowd, while the houses of two ministers were torched.

According to news agency AFP, police said that Amarkirti opened fire on two people who were trying to stop his car in Nittambua. One person died in the shooting. After this, to avoid the anger of the people, the MP tried to hide in a nearby building. But angry people surrounded the entire building. Seeing being surrounded by people, the MP shot himself, due to which he died.

138 people injured so far
The clashes started when pro-government protesters started toppling the tents of the people protesting in Galle Face. Counter-violence started after the government supporters attacked the protesters. 138 people were injured during this clash in Colombo. He has been admitted to Colombo National Hospital. It is believed that President Gotabaya Rajapaksa can deploy the army in major cities.

Bangladesh gave one more year to repay the loan
Sri Lanka is going through the worst economic crisis since its independence in 1948. In view of this, Bangladesh has extended the repayment period of $ 200 million given through currency swap by one year. Sri Lanka had to repay the loan in 3 months, but then Sri Lanka got stuck in a serious financial crisis. After this Bangladesh has extended the loan repayment period.

Seeing danger of Omicron, rules changed for those coming from abroad, know what are...

28/11/2021/10:59:pm
New Delhi: The new variant of Coronavirus has created a stir all over the world. After giving relaxation in travel restrictions, all the countries...

Companies are now bringing them back from the chartered plane, they were forced to...

30/06/2020/10:29:am
New Delhi: Corona infection is continuously increasing in the country. But the government has allowed the reopening of stalled economic activities with some conditions...

13/03/2021/11:03:pm
Washington: Microsoft Chief Executive Officer (CEO) Satya Nadella and several US lawmakers have stated that they are angry with the continuing hatred of Asian...

All flights of Air India Express will fly on their own...

Leaders of Quad countries will meet again at the end of...