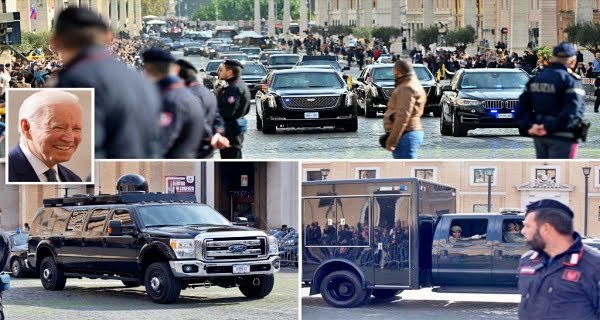 Rome: US President Joe Biden is currently on a tour of Italy. He has arrived in Italy on Friday for his five-day Europe visit. Biden, who arrived in the Vatican to meet Pope Francis, surprised everyone. According to a report in Daily Mail, in fact, Biden arrived here with a convoy of 85 vehicles, not 10 or 15, which people were also surprised to see.

Biden met Pope Francis at the Vatican on Friday, which lasted a long time. Due to this, his journey has been extended beyond the stipulated time. It is being told that topics like the corona epidemic, climate change, poverty were included in this conversation. During this, a dozen Swiss guards dressed in blue and gold stripes stood in a cautious posture in the courtyard of San Damaso to receive Biden his wife, and First Lady of America Jill Biden.

After this, the two left for a large meeting in which America’s First Lady and top officials were involved. Biden’s meetings on Friday were delayed due to protracted talks. The US president takes pride in his Catholic faith and takes it as a moral guide in shaping many of his social and economic policies. Due to last-minute restrictions imposed by the Vatican on press coverage of the meeting, no live photos or videos were released.

19/11/2020/10:11:pm
Kualalumpur: Chinese President Xi Jinping has denied speculation that his country is embroiled in tensions with Washington and Europe over technology and security. May...

11/06/2020/8:35:pm
Gwalior: For the first time in the political history of Madhya Pradesh, Congress leaders reached the ADG in Gwalior to demand an FIR against...