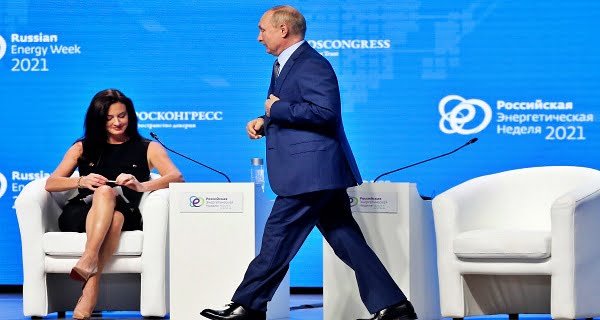 Moscow: In a conversation with Russian President Vladimir Putin, American anchor Hadley Gamble did some such acts that caused a ruckus. Russian media say Headley presented himself as a sex object to Putin. CNBC anchor Headley Gamble was the moderator at an event held in Moscow. At the time of question-and-answer with Putin, she was doing such things that people would be attracted to her.

What is the whole matter?
President Vladimir Putin was present at an event of the ‘Energy Forum’. During this, CNBC’s Hadley Gamble questioned Putin about the European gas crisis. While Putin was speaking, Gamble kept moving her legs strangely. Many times he pointed his feet directly towards the President.

Tongue sticking gestures
Not only this, but he also made gestures by taking out his tongue, which is considered indecent. It is said that the US anchor tried to present himself as a sex object.

Vladimir Solovyov, who is close to Putin and set the propaganda, told local media that CNBC’s Headley Gamble tried to divert the president’s attention. He said, “Headley’s behavior is unacceptable. Seeing her actions, it seemed as if Ko was presenting herself as a sex object in front of the President. He was not even afraid that he might be criticized for these actions.

At the same time, Headley Gamble has posted his photo printed in the newspaper on his social media account. The caption reads, ‘My best angle’. There has been no response from CNBC in this regard.

14/09/2020/10:12:am
Oregon: Amid reports of the disappearance of several people from the West Coast fires in southern Oregon in the US, officials said that due...

International flights will not start from December 15, threat of Omicron, the government took...

01/12/2021/8:29:pm
New Delhi: According to big news, the Directorate General of Civil Aviation (DGCA) on Wednesday decided to postpone the resumption of international flights from...