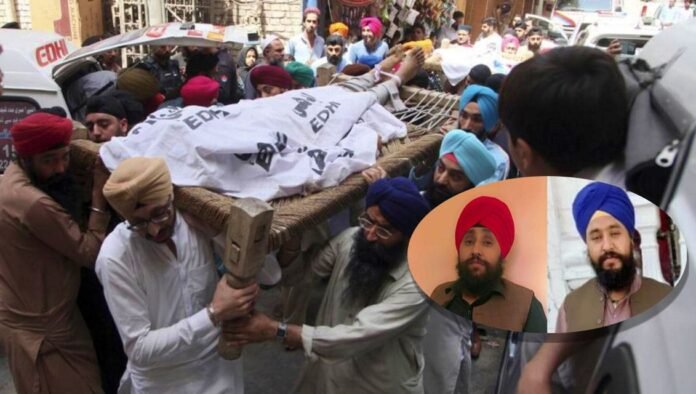 According to the police, Kanwaljit Singh (42) and Ranjit Singh (38) died on the spot in the morning attack by two bike-borne assailants and the attackers fled after the attack. Both these men from the Sikh community used to do spices business and had their shops in Bata Tal Bazar of Sarband, about 17 km from Peshawar.

The Khorasan unit of Islamic State (ISKP) claimed responsibility for the attack, claiming that it carried out the attack targeting two Sikhs in Peshawar. The ISKP is an ally of the Islamic State (IS) operating in South Asia and Central Asia.

Sadar Superintendent of Police Akeeq Hussain told Geo News that the Anti-Terrorist Unit has registered a case of the killing of two Sikhs. “The incident appears to be a terrorist attack. CCTV footage will be obtained and the suspects will be arrested soon.”

At the same time, angry Sikh protesters blocked the Peshawar-Islamabad road in front of Qila Bala Hisar. The protesters raised slogans against the murder and demanded justice. Pakistan Prime Minister Shahbaz Sharif condemned the incident and directed Khyber Pakhtunkhwa Chief Minister Mahmood Khan to ensure immediate arrest and punishment of the culprits. He also urged the Chief Minister to ensure steps to protect the lives and properties of citizens, especially non-Muslims. Sharif expressed his condolences to the bereaved families of the deceased. He said enmity with Pakistan was behind this “terrorist act”. Sharif resolved to eliminate the enemies of the country.

He urged law enforcement agencies and the Pakistan Tehreek-e-Insaf (PTI)-led provincial government of Imran Khan to ensure the safety of minorities.

Khyber Pakhtunkhwa Chief Minister Mahmood Khan condemned the attack and directed the police to take immediate steps to arrest the culprits. He said that this incident is a conspiracy to disturb the inter-religious harmony in the state. The Chief Minister said that justice would be provided to the families of the deceased.

Pakistan’s Foreign Minister Bilawal Bhutto-Zardari has demanded the immediate arrest of those involved. “No one will be allowed to disturb the inter-religious harmony and harm national unity in the country,” he said in a statement. He said that the Pakistan People’s Party is the real representative party of the country and it will not abandon the Sikh community.

Meanwhile, the Human Rights Commission of Pakistan condemned the killing. “This is not the first time that the Sikh community has been targeted in Khyber Pakhtunkhwa and we demand that the police immediately identify and arrest the perpetrators,” it said. Said that violence against religious minorities would not be tolerated.”

The All Pakistan Ulema Council (APUC) has also condemned the killing. APUC chief Tahir Ashrafi asked the Peshawar administration to ensure the safety of non-Muslim citizens and arrest the killers of the two Sikhs. About 15,000 Sikhs live in Peshawar, most of them in the Jogan Shah area of ​​the provincial capital Peshawar.

Similarly, a news channel journalist Ravindra Singh was murdered in 2020. In 2016, Soren Singh, a member of the National Assembly, was also gunned down in Peshawar.

More than 8 thousand cases in Maharashtra for fourth consecutive day, lockdown extended in...

27/02/2021/11:08:pm
New Delhi: In Maharashtra, more than 8 thousand cases of Coronavirus infection have been reported for the fourth consecutive day. According to the Health...

06/11/2020/12:23:am
Mumbai: The quiz show hosted by Amitabh Bachchan appears on KBC 12 with many interesting contestants taking part. So far only one contestant reached...

05/01/2022/9:17:pm
Hong Kong: Hong Kong on Wednesday announced a two-week ban on flights from India and seven other countries in view of the increasing cases...

200 million doses of corona vaccine have to be destroyed, said...