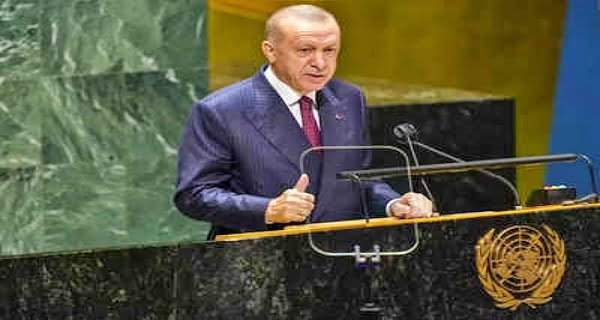 United Nations: Turkish President Rajab Tayyip Erdogan has once again raised the issue of Kashmir. Speaking at the United Nations General Assembly, he said that we stand in favor of resolving the ongoing problem in Kashmir for 74 years through dialogue between the parties and within the framework of relevant UN resolutions. However, this time, referring to Kashmir, he has talked about finding a solution through talks between the two countries. But two years ago, he had termed Kashmir as a burning issue.

In response to President Erdogan’s statement, the Foreign Minister has tweeted in relation to Cyprus. After meeting Cyprus Foreign Minister Nikos Christodoulides, Jaishankar tweeted that everyone should follow the relevant UN Security Council resolutions regarding Cyprus. Let us tell you that Turkey has illegally occupied large parts of Cyprus for several decades. The United Nations Security Council has also passed a resolution regarding this issue, but Turkey does not accept it.

What did the Turkish President mention about Kashmir?
In fact, after the removal of Article 370 from Kashmir on 5 August 2019, Pakistan had asked Muslim countries to intervene on this issue. Then Malaysia and Turkey further cooperation and they both criticized this move of India.

The Turkish president had described the situation in the United Nations as a “flaming issue” and criticized the abolition of the special status for Kashmir. He said in 2019 that despite the accepted proposals, Kashmir is still surrounded and 8 million people are trapped in Kashmir. At that time PM Modi had canceled a scheduled visit to Turkey.

What about India
India maintains that Kashmir is a bilateral matter between the then Prime Minister Indira Gandhi and the then Pakistani PM Zulfikar Ali Bhutto under the Shimla Agreement of 1972 and should not be internationalized.

Uighur Muslims also mentioned
In his speech on Tuesday, Erdogan also mentioned the problems facing the Uighur Muslim minority in China. He said that in the context of China’s territorial integrity, we believe that there is a need to demonstrate more effort regarding the fundamental rights of Muslim Uighur Turks. Uighur Muslims are being held in camps and facing restrictions on practicing their religion and their culture and language, overwhelmed by the majority of China.

30/10/2020/10:46:am
United Nations: On the occasion of the 20th anniversary of the resolution calling for equal participation of women in peace talks, the head of...

12/01/2022/9:42:am
Swami Vivekananda Jayanti is celebrated in our country on 12 January every year, this day is also celebrated as 'National Youth Day' in our...