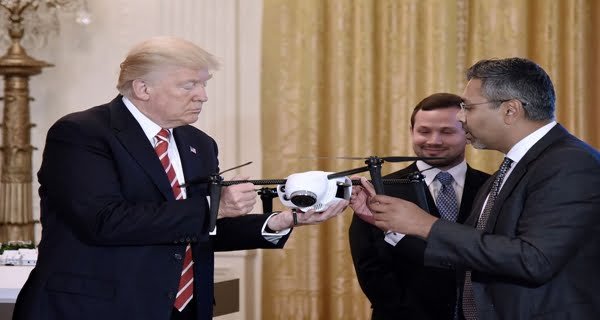 Washington: The Trump administration on Friday made major changes in its norms to export drones to its friendly countries. Under the new policy, drones flying at less than 800 km per hour will no longer be subject to the Missile Technology Control Regime (MTCR). “This move will increase America’s national security by improving the capabilities of its partners and increasing economic security by expanding the drone market for American industry,” White House press secretary Kelly McCannie said in a statement. “This will help our allies,” Assistant Secretary of State for Military Affairs Clark Cooper told reporters.

This will help them to meet their immediate needs related to national security and commerce, as well as serve the national and economic interests of America. ” He said that high-speed systems such as cruise missiles, hypersonic airplanes and advanced unmanned combat aircraft would not be affected by this change. The US is still a committed member of the MTCR and considers it important as a gimmick of not giving high missile technologies to countries like North Korea and Iran. Cooper said that the Trump administration’s priority is to prevent the use and proliferation of weapons of mass destruction. So far only three countries England, France and Australia are allowed to buy large, armed drones from American manufacturers.

Israel: Before the election results, Netanyahu claimed a big victory, posted on FB

24/03/2021/9:58:am
Jerusalem: Israeli Prime Minister Benjamin Netanyahu has claimed his right-wing party's "big victory" in parliamentary elections, despite the election results being unclear. In a statement...

Difficulties for Indians continue in UK travel, Covishield gets recognition, CoWIN certificate not

22/09/2021/4:51:pm
New Delhi: After questions were raised by India, Britain changed the travel advisory to include Covishield in the list of accepted vaccines. However, the...

In Jharkhand, urban laborers ensure 100 days of employment a year, CM launches this...

15/08/2020/12:51:am
Ranchi: Under the Chief Minister Urban Scheme in Jharkhand, now the state government will give 100 days of employment to laborers of the urban...