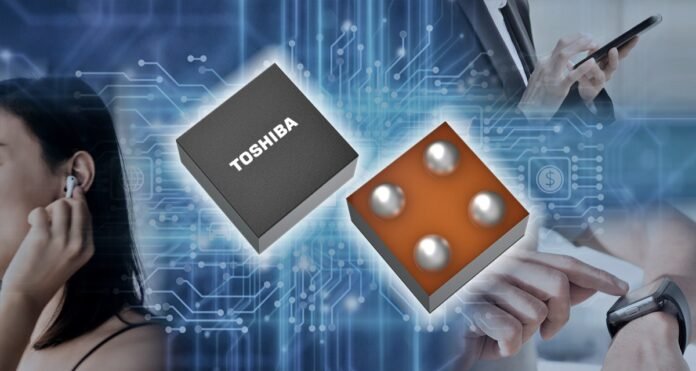 Toshiba Electronic Devices & Storage Corporation (“Toshiba”) has brought to market the “TCK12xBG Series” of load switch ICs that deliver a remarkable decrease in quiescent current[1] and an output current rating of 1A. Housed in a small WCSP4G package, the new ICs will support product developers in innovating a new generation of wearables and IoT devices that consume less power and offer a longer charge life. Volume shipments start today.

TCK12xBG Series uses a new driver circuit, which realizes a typical ON-state quiescent current of 0.08nA[1]. This represents in the region of 99.9% reduction from Toshiba’s current product, “TCK107AG,” a huge advance inefficiency that will allow wearables and IoT devices powered by small batteries to operate for significantly longer.

WCSP4G, a new package developed for the products, is about 34% smaller than that of TCK107AG, only 0.645×0.645mm, which allows mounting on small boards. Its back coating can reduce the damage that can happen to such a minute chip in the mounting process.

Toshiba will continue to enhance low quiescent current technology products, contribute to equipment downsizing and lower power consumption, and to a sustainable future.

Note:
[1] Among load switch ICs with a compact package size of 1mm2 or less and an output current rating of 1A. Toshiba survey, as of January 2022.

Messi told Barcelona, ​​’I want to leave the club’

26/08/2020/10:22:pm
Barcelona, ​​Spain: After dozens of titles, hundreds of goals, and countless records, Lionel Messi's career may have ended abruptly with Barcelona Football Club, but...

No entry of devotees in Bhasma Aarti of Mahakal, number of pre-bookers will also...

19/03/2021/2:37:pm
Ujjain: Devotees will not be able to attend the Bhasma Aarti of Mahakal Baba of Ujjain, one of the twelve Jyotirlingas of the country....

10/11/2020/10:54:am
Beijing: China on Monday said it had no reports of an Indian vessel with 23-member crew-carrying coal from Australia being stranded in the Chinese...