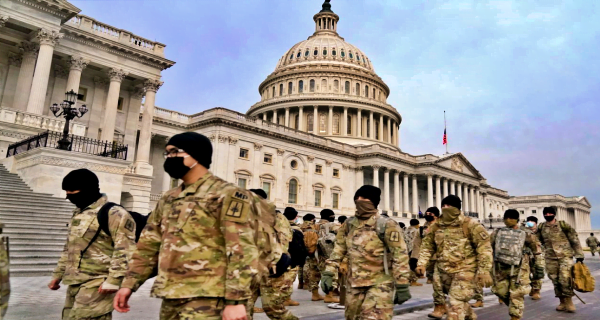 Washington: A large number of soldiers started arriving in the capital on Saturday by buses and planes from various states after the demand of sending more troops by the defense authorities in the wake of the possibility of violent protests in the United States of America. Security officials fear that Trump supporters, who feel Donald Trump was defeated because of rigging in the election … may elect violence before Biden’s swearing-in ceremony.

Fearing violent protests, army officials had appealed to the governors of dozens of states to send as many National Guard personnel as possible so that lockdown could be imposed in most parts of the city before taking oath. The US investigative agency FBI has feared arms demonstrations by right-wing extremist groups. Security officials are eyeing Sunday, as anti-government Boogaloo agitators plan to hold a rally in 50 US states a week before Biden’s swearing-in.

Illinois Governor JB Pritzker wrote on Twitter on Sunday, “I have given all the resources available to save citizens and the democratic process in the wake of the threat of an attack in the capital, Washington and state capitals.” Pritzker has asked the state police and the National Guard to be active in protecting the Illinois capital, Springfield. High alert has been declared in the states where Trump had alleged rigging in the elections. The states’ parliament buildings in Georgia, Michigan, Texas, Pennsylvania and Kentucky have been closed.

Let me tell you that on January 6, a crowd of Trump supporters had violently attacked the US Parliament House Capitol. Looking at the same incident, it is feared that violent fundamentalist groups may target the city. There are also apprehensions about the arrival of armed intruders and installation of explosive devices. More than 25,000 troops are expected to arrive in Washington by early next week. But at the same time, concern is being raised about the possibility of violence in the Parliament buildings of the states.
According to officials, in the last 72 hours at least 7,000 soldiers arrived at the Joint Base Andrews in Maryland. Several thousand soldiers are riding in buses and army trucks and coming to Washington. Army Affairs Minister Ryan McCarthy sought help from the governors. The FBI also feared violent attacks in Parliament buildings in all states.

Armed soldiers have been deployed in all the state capitals in view of the possibility of attacks on Sunday. Heavy armed men have been deployed in the Parliament buildings of all states of America. These buildings, which are symbols of democracy, look as if American embassies are under heavy security in war-torn countries. Governors have declared a state of emergency. The Parliament buildings of the states have been closed to the public.

It is feared that the protesters may start coming to the Parliament buildings of the states from Sunday. Joe Biden will take the oath of office and secrecy as the next president of the US on Wednesday, January 20.

12/07/2020
Auckland (United States): Users of apps such as Tinder, Spotify, and Pinterest running on the iPhone's iOS operating system had to face similar difficulties...

Nutrition rules to get stronger and build muscle

08/07/2020
Washington: Guidelines issued by US Immigration and Customs Enforcement have been condemned by many Congress members and top academic institutions under which foreign students...

22/01/2021
Koderma : At least six people were buried alive in Jharkhand's Koderma district when the roof of a mica mine caved in, a senior...