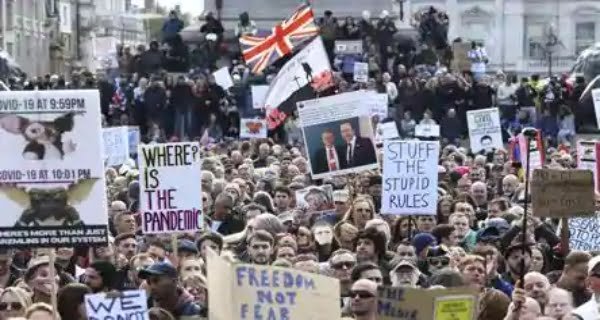 London: Thousands of people gathered at Trafalgar Square on Saturday to join a ‘we don’t agree’ rally to protest against restrictions aimed at preventing the spread of Coronavirus infection. These people were also opposing the ‘rule of six’, which prohibits more than five people from gathering together. The Metropolitan Police had already issued a statement saying that mobilization of people in this way would be in violation of the rules designed to stop the virus from spreading.

Commander Ed Adlaken, who is leading the police action on Saturday, said, “The officers will explain the rules to the people, talk to them and motivate them to follow the rules.” However, if people do not comply and continue to endanger themselves and others, the authorities will have to take action. ” A similar protest that took place in protest against the lockdown last week turned violent after which 32 people were arrested. The rally took place on Saturday in protest against London’s Mayor Sadiq Khan demanding strict restrictions in the UK capital. There is already a strict lockdown in many parts of the UK.

The Oil tanker was taken into the water at a safe distance off the...

05/09/2020/7:43:pm
Chennai: An oil tanker carrying crude oil from Kuwait to India caught fire near the coast of Sri Lanka which has now been moved...

Wedding season will start with Devuthani Ekadashi on 25th, no wedding moment after 11th...

12/06/2020/1:28:pm
Neemuch(MP). Resolve and passion is the power of human beings that makes any rare or impossible possible. Such resolve power is often seen in...