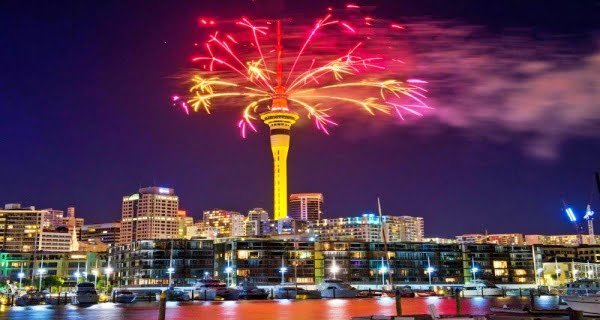 New Delhi: After staying in the restrictions due to Corona for almost a whole year, many countries of the world want to openly welcome New Year 2021 and with some rules, new Preparations are being made for the celebrations of the year. Like every year, the New Year will be celebrated this year with Dance and Fireworks but not ignoring the Corona rules. Many countries of the world can allow the party keeping in mind the wearing of social distancing and mask while dancing for the New Year. Kovid tracking app is also set to make the atmosphere of celebrations safe.

Rules of social distancing and corona tracking app in Thailand
Thailand has found a way to celebrate the new year this time. Thailand has decided to divert the crowd into separate zones (Crowd Gathering) for celebrations on the New Year. Due to this, the crowd will not accumulate in one place and the danger of spreading of Corona will also be possible. People who have joined the celebrations have been mandated to have ‘Covid-19 Tracking App’, so that they can be alert when there is an infection nearby. Celebrations will take place in most cities in Thailand, but the New Year celebrations in Pataya have been canceled.

Digital New Year Celebration in Scotland
Scotland is prohibited from celebrating together in the new year. But an option has been found to say goodbye and celebrate this difficult year. Online programs have been prepared for New Year Celebration. Its live telecast has been started from 28 December. Apart from this, Drone Show will be organized here, which will be telecast live. People can enjoy it by sitting at home with their family. For the first time in the last two decades, this time there will be no parties in the streets of London on the banks of the River Thames.

Pre-booking in Australia will be New Year celebration
In Australia, New Year celebrations take place in a different way. From the afternoon of 31 December, Sydney Harbor Bridge has programs for Boat Race, Musical Events and Military Demonstrations. This year all these programs have been canceled. Entry will be given on Harbor Bridge on New Year’s Day to those who already have bookings for restaurants. People have also been appealed to take care of social distancing. This year there will not be much fireworks in Australia but people can watch live telecast of many celebrations.

Celebration of New Year will be done in Dubai with simplicity
People from all over the world gather to watch Fireworks on Burj Khalifa, one of the world’s tallest buildings in the world, but pre-booking from the app to watch fireworks this year. Will be. Even after booking, social distancing will have to be maintained and it will be necessary to wear a mask. Every year millions of people used to gather here to watch Special Fireworks on New Year, but this year a lot of work is expected to reach the Burj Khalifa. Concerts in Dubai also require permission from the local administration and private parties and gatherings are prohibited.

22/06/2020
New York: The statue of Theodore Roosevelt outside the American Museum of Natural History in New York City will be removed amid protests against...

18/10/2020
Beijing: The Health Administration of China has confirmed the existence of coronavirus on the outer surface of imported refrigerated marine fish packets in the...

25/07/2020
New Delhi: Floods in Assam (Assam) and Bihar have made the situation grim and a population of about 37 lakhs has been affected. Three...

29/11/2020
New Delhi: On the proposal and further strategy of the Union Home Minister Amit Shah, the leader of the farmers protesting against the withdrawal...

17/08/2020
Mumbai: Bollywood filmmaker Nishikant Kamat has passed away. He was admitted to a hospital in Hyderabad. Kamat had a liver disease and was admitted...