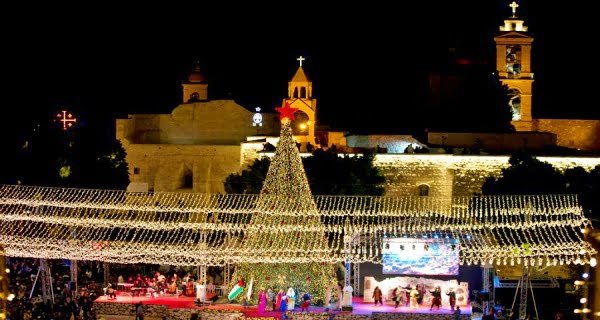 Bethlehem: Many bands in Bethlehem took out the parade with enthusiasm but the Christmas Eve celebrations at the birthplace of Jesus sparked the Corona Virus epidemic. And due to the restrictions on lockdown, the faded and few people came to watch the parade.

A similar view was seen around the world where family events and mass prayer meetings were held on a small scale or canceled.

Australia: In Australia, people had to book online tickets to attend prayer meetings in the church keeping social distance.

Italy: Pope Francis is scheduled to attend a prayer meeting in the Vatican a few hours before the curfew in Italy where there will be almost no people.

Europe: Celebrations have also been canceled at other places in Europe or are being held on a smaller scale. Because cases of infection have increased after the introduction of new types of viruses across the continent.

Britain: Thousands of truck drivers and passengers got stuck in the jam at Dover harbor in Britain on Christmas Eve. This situation was caused by the slow pace of investigation of the corona virus.

Israel: Thousands of foreign tourists come to Bethlehem to celebrate Christmas but foreigners have not been able to come this year due to the closure of Israel International Airport.

Authorities in Bethlehem tried hard to organize events in the wake of the worsening situation. Mayor Anton Salman said, “Despite all the obstacles and challenges caused by the Coronavirus and the lack of tourism, the city of Bethlehem is still looking to the future with hope and in all possible human and religious ways Will celebrates Christmas. “

19/05/2021/1:27:pm
Taipei: A U.S. warship has again sailed through the sensitive waterway that separates Taiwan from its giant neighbor China, at a time of increased...