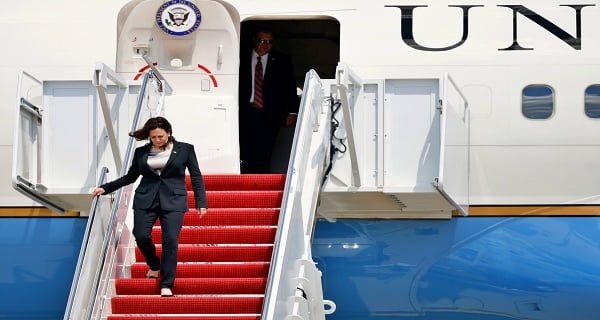 Joint Base Andrews (USA): The plane of US Vice President Kamala Harris returned to Joint Base Andrews in Maryland 30 minutes after taking off due to a technical problem. Harris left for Guatemala and Mexico on Sunday. The ‘Air Force Two’ plane landed safely here and as he exited, Harris signaled ‘thumbs up.

He said, “I am fine, fine. We even prayed a little, and we are fine.” After about an hour and a half, the Vice President left in another plane. Harris spokeswoman Simon Sanders told reporters that after takeoff, crew members noticed a problem with the ‘landing gear’, which could have caused some more technical issue.

“However, there was no emergency problem related to security. However, with full security, we returned to JBA, where they had all the equipment to fix it.” Sanders was also on board the plane with Harris.

Indonesia plane crash: remains and debris of 62 people who fell in the sea...

29/06/2020/9:46:pm
Bhopal: The much-awaited Shivraj cabinet expansion of Madhya Pradesh seems to be getting screwed. In the presence of CM Shivraj Singh in Delhi,...

24/08/2020/9:41:pm
Chandigarh: Haryana Chief Minister Manohar Lala Khattar has been found infected with the Corona Virus. Whose information he himself tweeted. He wrote in his...

03/11/2020/5:22:pm
Mumbai, Maharashtra, India: HDFC Bank Ltd. has been voted ‘Most Outstanding Company – Financial Sector’ in India, in a poll conducted by the well-known publication Asiamoney....