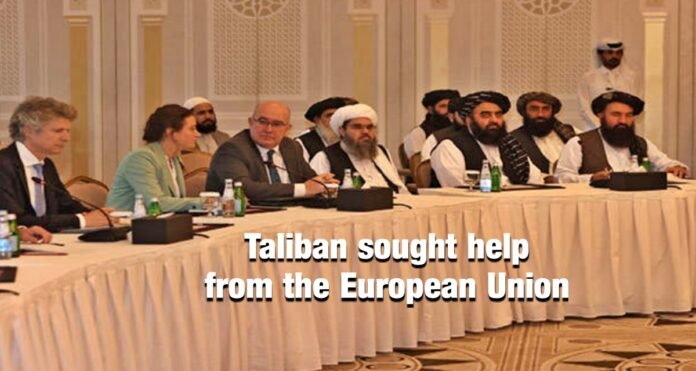 Both sides sent senior officials to Doha, the capital of Qatar, for talks. The talks came just ahead of two weeks of talks between the US and the Taliban starting on Monday. Taliban-US talks are also going to be held in Doha itself. The European Union’s External Action Service (EEAS) said in its statement, ‘The talks do not mean the recognition of the Taliban interim government by the European Union. But the interests of the European Union and the Afghan people are part of the EU’s operational engagement.

The Taliban delegation was led by Interim Foreign Minister Amir Khan Mutaqqi. He was accompanied by interim ministers of education and health, acting governors of the central bank and officials from the ministries of foreign, finance, and interior, and the Directorate of Intelligence. The European Union was led by Tomas Niklasson, the Special Envoy of the European Union for Afghanistan. It was also attended by officials from the EEAS and the European Commission for Humanitarian Aid, International Partnership, and Migration.

Discussion on the human condition
The European Union statement said the Taliban committed to stick to its promise of amnesty to Afghans who worked with the US and its allies against the Taliban during the West-backed government. With the arrival of winter, both sides expressed serious concern over the deteriorating humanitarian situation in Afghanistan, the statement said. It said that the European Union has committed to providing humanitarian aid. The European Union also put pressure on the Taliban to form an inclusive government. It also laid emphasis on the education of girls.

27/06/2021/8:01:pm
Lucknow: There are still six months left for the Uttar Pradesh assembly elections, but political parties have already started their preparations. In this sequence,...

18/02/2021/10:03:am
Moscow: An Unmanned Cargo Vehicle from Russia arrived at the International Space Station on Wednesday with supplies. The 'Progress MS-16' cargo vehicle was launched...

11/02/2021/10:17:am
Dakar, Senegal: On Wednesday, 28 Togo peacekeepers were injured in an attack on a temporary United Nations base in Mali. UN spokesman Stephen Dujarric...