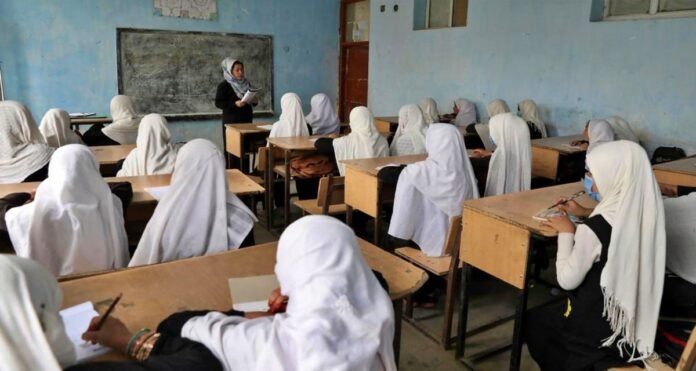 Kabul: Afghanistan’s new Taliban rulers say they hope to open all schools for girls across the country at the end of March. A Taliban spokesman shared a set timeline for the first time with the Associated Press on Saturday, in the context of a major demand from the international community.

Since the Taliban took over the country in mid-August, girls in most areas of Afghanistan have not been allowed to attend school after seventh grade. The international community appears unwilling to formally recognize the Taliban-run government and fears they may impose the same draconian measures as were in force 20 years ago during their previous regime. At that time women were banned from education, work, and public life.

Zabihullah Mujahid, the Taliban’s deputy minister of culture and information, said his education department wanted to open classes to all girls and women after the Afghan New Year, which begins on March 21. Afghanistan, like neighboring Iran, follows the Islamic solar Hijri Shamsi calendar. Mujahid said in an interview that education for girls and women is “a question of competence.” He said that there should be completely separate arrangements in schools for girls and boys. He said the biggest hurdle so far is finding or building enough hostels where girls can stay while going to school.

He said that in densely populated areas it is not enough to have separate classes for boys and girls, separate school buildings are needed. “We are not against girls’ education,” the Mujahid said. The orders of the Taliban so far have not been uniform and they change from province to province. Girls are not allowed to attend classes in government schools after class seven, except in about 10 of the country’s 34 provinces.

In the capital Kabul, however, private universities and high schools continue to operate uninterrupted. Boys and girls are always separated in most small groups. “We are trying to address these problems by the coming year so that schools and universities can be opened,” Mujahid said.

Gates of Jagannath temple will open from today

Kidnap in Haiti threatens to shoot American citizens in the head, said- pay the...

23/10/2021/2:21:pm
Port-au-Prince: The leader of a notorious Haiti gang accused of kidnapping 17 members of a US missionary group has warned that the hostages will...

In the meeting with Sonia, the Chief Ministers said – NEET and JEE examinations...

19/07/2020/10:57:am
Beijing: The outbreak of the Kovid-19 pandemic has resurfaced in the far western part of China and the number of infected patients has increased...

Now all adults in America will be able to get booster...