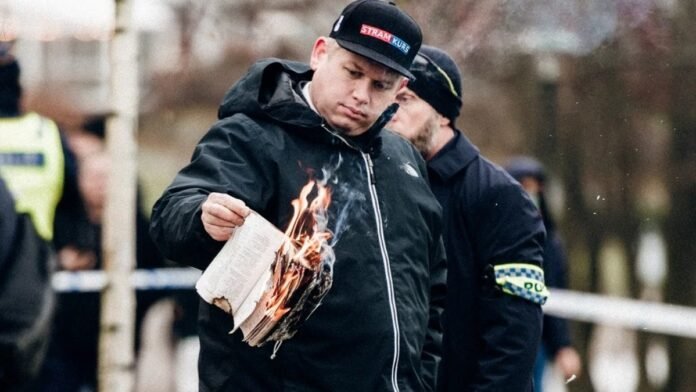 Stockholm: Tension has increased these days in the relations between Turkey and Sweden. Here in Sweden, a period of tremendous protests against Turkey is going on. A copy of the Quran has been burnt by anti-Islamic extremists during protests against Turkey in Stockholm on Saturday. After this incident, it has been condemned internationally. Expressing displeasure over this incident, Turkey has unilaterally canceled the proposed visit of Sweden’s Defense Minister to Ankara. And asked Sweden to take necessary action against the culprits.

Turkish authorities also condemned the permission given to right-wing Swedish-Danish politician Rasmus Paludan to protest on Saturday in front of its embassy in the Swedish capital. During the demonstration, Paludan made a scathing attack on Islam and set the Quran on fire with a lighter. He told the crowd, “If you don’t think there should be freedom of expression, you must be living somewhere else.”

It is known that freedom of expression in Sweden is guided by the constitution. And the constitution gives wide rights to the people to express their views in public. However, incitement to violence or hate speech is not allowed. Last year, Paludan announced his Quran-burning ‘tour’ during the Muslim holy month of Ramadan. After this, riots broke out all over Sweden.

Who is rasmus paludan
Rasmus Paludan is a far-right leader of Sweden and a Danish-Swedish politician. He heads the far-right party Stram Kurs (Hard Line). They have organized many events, where the Quran was burnt, due to which many incidents of violence came to the fore. Last week, he burnt an effigy of Turkish President Recep Tayyip Erdogan in Stockholm. Permission obtained from the police for the demonstration stated that their protest was against Islam and was called by Turkish President Erdogan in an attempt to influence freedom of expression in Sweden.

Worldwide condemnation
After Paludan burnt the Quran, there was a flood of condemnation from Muslim countries. The Organization of Islamic Cooperation called it a provocative action. Also said that it targets Muslims. The organization further said that the incident insults their sacred values. The organization has asked Sweden to punish those people who are behind this incident. Saudi Arabia, on the other hand, has emphasized the importance of ‘spreading the values of dialogue, tolerance, and coexistence, rejecting hatred and extremism’. The Gulf Cooperation Council has also condemned this protest.

26/05/2022/12:58:pm
New Delhi: Information and Broadcasting Minister Anurag Thakur on Wednesday mentioned the progress of the web by means of inexpensive cell gadgets has reignited...

17/09/2022/8:33:pm
United Nations: China has blocked at the United Nations a proposal by the US and India to blacklist Pakistan-based Lashkar-e-Taiba terrorist Sajid Mir. This...

13/09/2020/12:26:am
Ingelheim, Germany:  This collaboration combines Click Therapeutics’ specialty in developing efficacious and engaging digital therapeutics with Boehringer Ingelheim’s expertise in clinical development of treatments for...

Expansion of coal likely to double Delhi’s premature death in next decade: Study