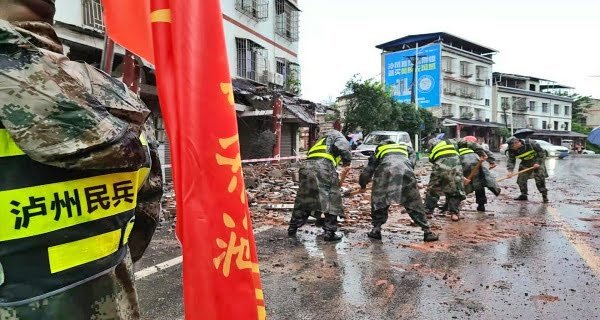 Beijing: A 6.0-magnitude earthquake struck China’s southwestern Sichuan province on Thursday, killing at least three people and injuring 60 others. The state-run Xinhua news agency said the quake struck Luxian County at 4:33 am local time and its epicenter was located at a depth of 10 kilometers from the ground.

Three people were killed and 60 others were injured in the earthquake. According to the China Earthquake Network Center (CENC), the epicenter of the quake was at 29.2 degrees north latitude and 105.34 degrees east longitude. About 3,000 people were rushed to the rescue efforts in Luzhou city after the earthquake.

Temporary camps have been set up for residents in a village in the county’s Fuji City. Thousands were killed and many others injured in an eight-magnitude earthquake in Sichuan province in 2008.

How to lose your weight by eating healthy food

3 serial blasts in Shia Masjid of Kandahar, people were engaged in Namaz, news...

18/04/2022/8:54:pm
Colombo: The economic and political crisis continues in Sri Lanka. Meanwhile, the opposition has decided to bring a no-confidence motion against Rajapaksa in the...

20/07/2020/12:18:am
Mumbai: Amitabh Bachchan, who is suffering from Corona Virus infection, is constantly expressing his feelings from the hospital. Now he has shared a poem...

Pakistan will remain on FATF gray list, punishment for not taking...

13 killed in a fire in a tourist spot in northern...