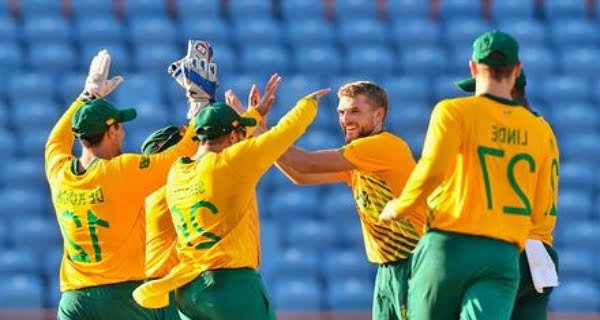 West Indies: South Africa won the T20I series against West Indies in St George’s (Grenada), July 4 (AP) Aiden Markram and Quinton de Kock shared a 127-run second-wicket stand as South Africa clinched the fifth T20I here on Saturday. They won the five-match series 3–2 by defeating West Indies by 25 runs in Man of the match Markram scored 70 runs which is the highest score of his career.

De Kock continued his stellar form and scored 60 runs off 42 balls. After winning the toss, South Africa made 168 for four and batted first. Leg-spinner Tabrez Shamsi then took one wicket for just 11 runs in his four overs while Kagiso Rabada dismissed Dwayne Bravo and Nicholas Pooran in successive deliveries in the 19th over. Lungi Ngidi took three wickets for 32 runs. In the end, the West Indies team could only manage 143 runs for nine wickets.

For West Indies, only openers Evin Lewis (52) and Shimron Hetmyer (33) could contribute in batting. South Africa thus won the first T20 series in two years. This is also the first win for captain Temba Bavuma and coach Mark Boucher in the T20I series. Shamsi showed why he is the top-ranked bowler in T20Is. He took seven wickets in the series at an average of 11.4. He has adjudged the best player of the series.

04/07/2021/10:53:pm
New Delhi: Talks are going on between India and China at several levels to resolve the ongoing dispute over the Line of Actual Control...

03/07/2021/9:56:am
Washington: The US has included Pakistan along with 14 other countries in a list of the Child Soldier Protection Prevention Act (CSPA). The law...

02/02/2021/9:38:pm
Islamabad: The Supreme Court of Pakistan has called a Pakistani-British person acquitted in the 2002 Murder case of American journalist Daniel Pearl a so-called...

US President Joe Biden’s warning to the Taliban, if they harm...