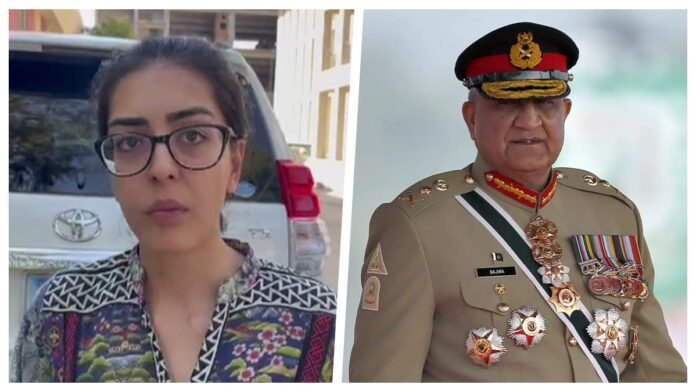 ISLAMABAD: The Pakistan Police on Friday registered a case against advocating Iman Hazir Mazari for making “indecent and derogatory” remarks against Pakistan Army Chief General Qamar Javed Bajwa. Iman is the daughter of Shireen Mazari, a former human rights activist and minister in the Imran government. On the application of Judge Advocate General, GHQ, Lt Col Syed Humayun Iftikhar, an FIR was registered against Iman under Section 505 (hate speech) and Section 138 of the Pakistan Penal Code at Ramana Police Station, Islamabad. According to the complaint application seeking registration of an FIR, Mazari had made “derogatory and hateful” remarks against the Pakistan Army and its chief General Bajwa on May 21.

It has been said that his objectionable statements are very derogatory, whose intention was to incite rebellion in the Pakistani army. The complaint alleged that Mazari humiliated the top leadership of the army with his statement and that the statement was intended to create rebellion and anarchy in the Pakistan Army, which is a punishable offense. Iman made this statement after the arrest of his mother on 21 May last. Iman’s mother was arrested by officials of the Anti-Corruption Department of Punjab province.

However, Iman’s mother was released the same day due to the intervention of the Islamabad High Court. Shireen (59), who was a cabinet minister in the Imran Khan government, has been criticizing the army since the fall of her party’s government. When asked about Shireen’s arrest, her daughter Iman had accused General Bajwa of saying that the army played an important role in her mother’s detention.

03/02/2021/10:07:pm
New Delhi: The music keeps the broken heart engaged while keeping everyone connected. Something similar happened on the set of Indian Idol 12. The...

23/02/2022/9:17:pm
New Delhi: The confrontation between Russia and Ukraine could lead to a sharp jump in the price of crude oil and liquefied gas (LNG)...

15 countries got a chance in IPL’s mega auction, less than 600 players got...

PM should not give strength to China’s conspiratorial stance with his...