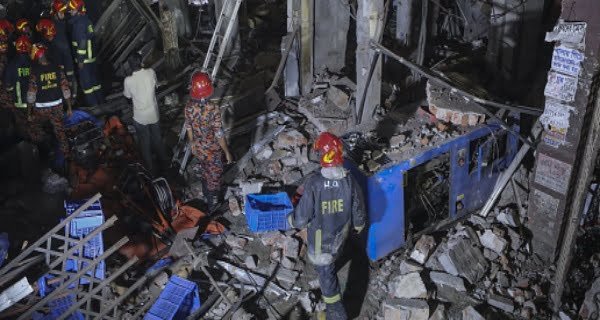 Dhaka: A massive explosion in a three-story building in a crowded area of ​​Bangladesh’s capital Dhaka on Sunday may have been caused by a gas line fault or a gas cylinder fire. Officials made this claim on Monday. At least seven people were killed while 400 others were injured in the incident. However, the police have denied that there was any conspiracy behind the accident. The accident took place at Mogbazar at around 7.30 pm on Sunday.

Police have said that preliminary investigation suggests that the explosion may have been caused by accumulation of gas. After visiting the blast site, Inspector General of Police Benazir Ahmed suspected that the blast may have been caused by methane gas. He told reporters that, however, no conclusion can be reached before a full investigation is done. “When gas cylinders are not properly maintained, they can turn into explosives. “

Ahmed said Sunday’s incident was similar to similar blasts at Shanir Akhara, Narayanganj and other places. There was an explosion in Narayanganj Masjid in September last year due to a gas leak. Officials suspect that the building where the collapse was located was the center of the incident, as there was a restaurant and the explosion was probably caused by a gas line fault or a gas cylinder burst.

Dhaka Metropolitan Police Commissioner Shafikul Islam said seven other nearby buildings and two passenger buses were also damaged in the blast. Around 400 people have been injured in the accident, out of which the condition of 50 is said to be critical. The seriously injured people have been admitted to Dhaka Medical College Hospital and Sheikh Hasina National Institute of Burn and Plastic Surgery, he said.

Around 300 people are being treated at Dhaka Community Hospital. AGM Rahmatullah Shabooz, the ‘outdoor in-charge’ of the hospital, said that most of the injured had cut wounds on the head or body. Sabooj said, “Most people have glass cut marks on their bodies. Many people have injury marks on their heads.”

Denying that there was any conspiracy behind the blast, the police commissioner told BDNews that he did not think so. He said that if something like this had happened or the bomb had exploded, the evidence would have been found. “We have come to know from the fire brigade that gas had accumulated there,” he said.

Brigadier General Sajjad Hussain, the head of the fire brigade, said preliminary investigations suggest that the explosion occurred due to pressure created after gas accumulation. Hussain said, “A restaurant on the ground floor of a nearby building had gas cylinders and a showroom on the upper floor had air conditioners, while at the site where road construction work was going on, there were gas cylinders as well…we checked. has started.”

TV channels in their news have given information about the injuries of many people in the accident, mostly the people on the bus and the passers-by. The injured are being treated in three hospitals. Doctors say that many people have suffered severe burns. According to local residents, the blast caused panic and tension in the city. At the same time, videos shown on television show broken pillars, pieces of concrete and glass on the road in the central part of the country’s capital.

One of the injured, Tajul Islam (50), told PTI, “I was in the bus when the blast happened. I jumped out of a small window. At first I thought there was an explosion in the gas cylinder of the bus… I have never seen such a big explosion in my life.” Tajul Islam has suffered injuries on his back and has also complained of hearing loss due to the blast.

According to eyewitnesses, several buses and cars collided on the road soon after the explosion, while panicked passengers struggled to get out of the vehicles.

India is the second country with the most active cases, Largest jump in Corona...

11/08/2020/10:27:pm
New Delhi: Industrial production declined by 16.6 percent in June, mainly due to lower output of manufacturing, mining, and power generation. According to the Index...

Britain: there is no additional covid vaccine yet to be sent to India

28/04/2021/10:54:am
London: Britain said on Tuesday that it is currently emphasizing its domestic preference for Covid-19 Vaccine and that it will have additional supplements to...