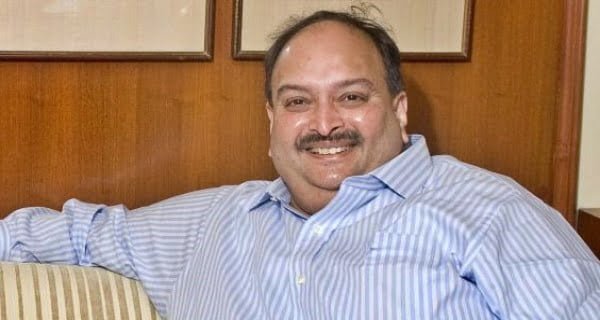 Dominica: In a setback for India, fugitive diamantaire Mehul Choksi has been granted bail by the Dominican High Court, reportedly on medical grounds, and will go back to Antigua and Barbuda.

His bail bond has been set at an amount of 10,000 EC dollars (Eastern Caribbean dollar).

Choksi had mysteriously gone missing on May 23 from Antigua and Barbuda, where he has been staying since 2018 as a citizen after he fled Delhi.

He was detained in the neighboring island country Dominica for illegal entry. His lawyers alleged that he was kidnapped from Jolly Harbour in Antigua by policemen, who looked like Antiguan and Indian and then brought to Dominica on a boat.

Choksi had on Wednesday filed a case in the High Court in Dominica against the chief of police, investigating police officer Alleyne Maximea, minister of national security Rayburn Blackmoore, and magistrate Candia Carette-George.

His lawyers are seeking a declaration from the court that “the decision of the police chief and investigating officer to charge the Choksi is an abuse of the process of the court and or a violation of the rule of law and is accordingly unlawful, null and void and of no effect.”

Choksi, who is a key accused in the Rs 13,000-crore PNB loan fraud case in India, also wants the court to quash the criminal charge against him for breach of section 27A of the Immigration and Passport Act.

His lawyers had asked the court for an order declaring that the decision of Rayburn Blackmoore, minister of national security, “was taken in breach of the principles of natural justice”. They are further seeking an Order of certiorari in which a higher court orders a lower court to deliver to it a case record for review of the lower court’s decision. They have also sought cost and damages on Choksi’s behalf.

A magistrate court in Dominica had earlier sent businessman Mehul Choksi to state prison, his lawyer in India said, but added that he would continue to remain in hospital as his medical condition “deteriorated”.

“Yes, police custody has been changed to prison custody but he shall remain in hospital as his medical condition has deteriorated,” lawyer Vijay Aggarwal had said.

His legal team had submitted a medical certificate from the doctors of Dominica China Friendship Hospital, where Choksi was being held, stating that he is suffering from “mental stress” and elevated blood pressure.

Choksi and his nephew Nirav Modi had fled India in the first week of January 2018, weeks before a multi-crore scam in the Punjab National Bank rocked the Indian banking industry. The duo allegedly bribed officials of the state-run bank to get Letters of Undertaking (LoU) based on which they availed loans from overseas banks that remained unpaid.

19/04/2021/11:11:am
New Delhi: The second wave of Coronavirus infection has caused a furor in the country. In many states, even after the night curfew and...

01/12/2020/8:54:pm
Berlin: German pharma companies BioNTech and its partner American pharmaceutical company Pfizer have stated that they have reported coronavirus to the European Medicines Agency....