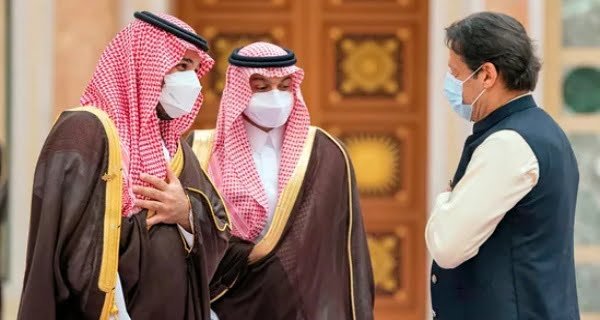 Islamabad: Saudi Arabia has agreed to lend $3 billion and $1.2 billion and $1.5 billion worth of oil as safe deposits to cash-strapped Pakistan. A formal announcement about the agreement reached during Pakistan Prime Minister Imran Khan’s visit to Saudi Arabia this week will be made by his advisor (finance and revenue) Shaukat Tarin and Energy Minister Hammad Azhar, the Dawn reported.

Information Minister Fawad Chaudhry told Twitter about the aid provided by the Saudi Arabian government. He tweeted, “Saudi Arabia has supported Pakistan by agreeing to deposit USD 3 billion in Pakistan’s central bank, and will also bear the cost of US $ 1.2 billion of petroleum products during the year “

The report quoted an official as saying that the Saudi government would immediately deposit USD 3 billion into Pakistan’s account for one year and continue until at least October 2023 the completion of the International Monetary Fund (IMF) program. In addition, the Saudi government will lend oil up to US$1.5 billion every year.

CBSE said there will be no cut in the social science syllabus of the...

06/12/2020/5:03:pm
Indore: The leaders of Madhya Pradesh are also following the path of Uttar Pradesh Chief Minister Yogi Adityanath. After discussions of changing the names...

20/08/2021/10:23:am
Beijing: With the Taliban taking power in Afghanistan, China's eyes are now on rare metals worth trillions of dollars present there on earth. CNBC...

18/01/2021/11:09:pm
New Delhi: Despite creating an atmosphere of constant tension on LAC, the dangerous move of China (China), which is failing on every front from...