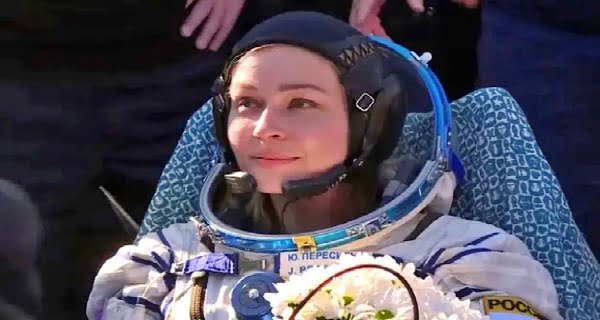 Karaganda, Kazakhstan: For the first time, a film has been shot in space. The Russian film crew went to the International Space Station 12 days ago to shoot a scene in the film ‘Challenge’. Crew members returned to Earth on Sunday morning. The crew includes actress Yulia Peresild and director Klim Schipenke, while they are accompanied by the return of Veteran Cosmonaut Olen Novitsky, who was on the ISS for 191 days.

The Space Shuttle of this team took off from the space station at 6.45 am (Indian time) on Sunday morning and made a successful landing in Kazakhstan after about three and a half hours at 10.05 am. The entire crew is said to be safe after landing.

All three were taken by a Russian helicopter to a recovery center in the city of Karaganda, Kazakhstan. Where, after recovering from the fatigue of space travel, he will be taken by plane to the Gagarin Cosmonaut Training Center in Star City, Russia, where he will be examined.

To film different scenes of ‘Challenge’, the film team filmed a 35-40 minute long sequence on the ISS while spending 12 days in space.

The film is the story of a female doctor who flies to the International Space Station to rescue an astronaut who needs immediate surgery in space. In this scene of the film, cosmonauts Anton Shkaplerov and Pyotr Dubrov, who were on the ISS, also made cameo roles.

Little spider has killed King Cobra, everyone is stunned to see the dreadful battle

17/02/2021/8:32:pm
Everyone knows how dangerous and poisonous Snake is. In the blink of an eye it can kill humans and many animals. They know their...

Tokyo Olympics: The ‘strength’ of all countries was seen in the opening ceremony

23/07/2021/8:58:pm
New Delhi: The official inauguration of the Tokyo Olympics, the grand tournament of the Games, took place on Friday. The Olympic Opening Ceremony was...

30/12/2020/9:39:pm
Kota: A sensational case of the overturning of the vehicle in the quota of Mohammad Azharuddin, a former cricketer of Team India has come...

State Governments may suffer huge losses due to strike of Coal India employees,...

Putin angry on entry of American warship into Black Sea

02/11/2021/8:46:pm
Moscow: Russian President Vladimir Putin has reacted sharply to the entry of a US warship into the Black Sea. He instructed the Russian army...