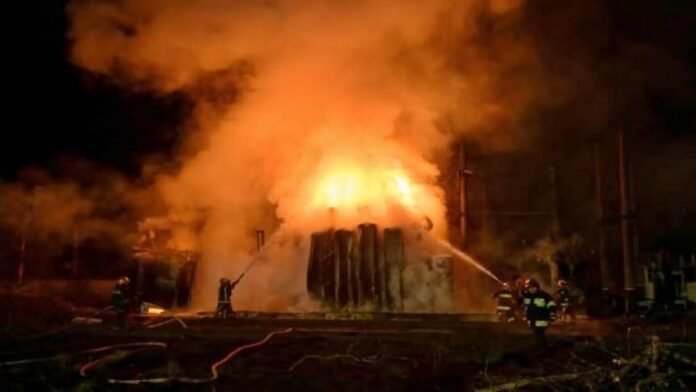 Kyiv: At least 19 people were killed in Russian missile attacks on residential buildings in a coastal city near Ukraine’s port city of Odesa early Friday. The authorities gave this information. The attack comes at a time when Russian forces withdrew from Snake Island, a major island in the Black Sea, on Thursday. Video of the attack showed debris from buildings in the small town of Serhivka, some 50 kilometers southwest of Odesa. Ukraine’s presidential office said three X-22 missiles fired by Russian bombers hit a building and two camps.

Ukrainian President Volodymyr Zelensky’s chief of staff, Andrey Yermak, said: “A terrorist state is killing our people.” They are fighting civilians in response to the defeat in the war zone.’ Ukraine’s security service said 19 people, including two children, had died. 38 others, including six children and a pregnant woman, are hospitalized. Most of the victims are residents of residential buildings. A day before the attack, Russian forces withdrew from Snake Island, reducing the threat to Ukraine’s important port city of Odesa. However, Russian troops are engaged in efforts to encircle the eastern Luhansk province.

Russian soldiers are trying to besiege Luhansk
The Kremlin (Russian presidential office) called the withdrawal of troops from Snake Island a “goodwill gesture”. At the same time, the Ukrainian military said that the Russians fled the island in two speedboats after Ukrainian artillery and missile attacks. The exact number of soldiers has not been disclosed. In eastern Ukraine, Russian troops are trying to surround Luhansk, the last stronghold of the Ukrainian military’s resistance in Luhansk, one of the two provinces under the Donbas region.

Russia occupied the mine, the gelatin factory, and the oil refinery
Luhansk Governor Serhi Hedai said Russia was trying to surround the city of Lysychansk and fighting to take over an old oil refinery in the city. He told that there is a fierce bombing going on in the city. However, Russian Defense Ministry spokesman Igor Konashenkov said on Friday that Russian and Luhansk separatist forces have seized the refinery as well as a mine and a gelatin factory in Lysychansk “over the past three days”. At the same time, the Ukrainian presidential office said that civilians have also been killed in eastern Ukraine in several Russian attacks in the last 24 hours.

26/03/2022/9:38:pm
Warsaw: Joe Biden of America met with the foreign and defense ministers of Ukraine in Warsaw, the capital of Poland on Saturday. This is...

18/12/2020/11:32:pm
New Delhi: Vistara Airlines has made it easier for air travelers to book tickets. Now if you book tickets of Vistara airline then no...