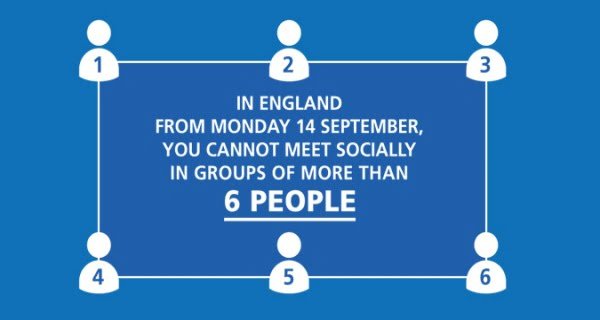 London: The so-called “Rule of Six” came into force in Britain on Monday, allowing the police to take action against a program involving more than six persons and impose a fine of 100 pounds. Has got the right to The new rule, announced last week by Prime Minister Boris Johnson, was ‘Indoor and Outdoor’ in the UK and only ‘indoor’ in Wales, with Corona Virus cases rising again in the UK. ‘(Within) will apply.

Britain’s Home Minister Preeti Patel said, “All of us across the country have made many sacrifices in the fight against the corona virus. The recent increase in cases has made it clear that more steps need to be taken to prevent the spread of the disease. ”

The Indian-origin minister said, “From Monday the new rule will give the police the right to take action against anyone who violates the rule of six. While we are fighting the fight against this virus, I appeal to the public not to participate in any program which has more than six people. Whether the program is in or out. “

03/01/2021/3:38:pm
Dr. Ashutosh Upadhyay Gemini predictions 2021 The Gemini 2021 horoscope predictions reveal that this year is for growth and progress for all Gemini natives. Success will...

WHO admitted, coronavirus was leaked from Wuhan lab in China

China sets target for corona vaccination, plans to vaccinate 70-80% of...