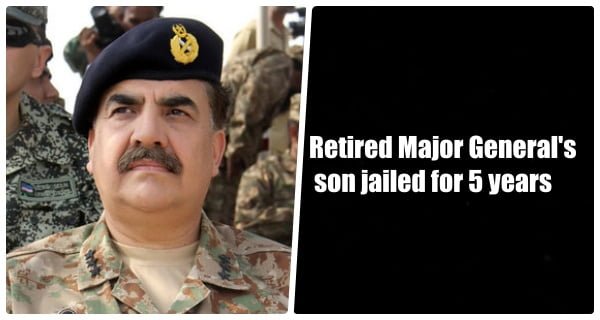 Karachi: A military court in Pakistan has sentenced the son of a retired Major General of the Pakistan Army to five years in prison for asking Army Chief General Qamar Javed Bajwa to resign. The News International quoted BBC Urdu Service as saying that Doshi allegedly wrote a letter criticizing the extension given to Army Chief General Bajwa and sought his resignation.

The report said that Major General (retd) Zafar Mehdi Askari’s son Hasan Askari was convicted of treason for criticizing the expansion of the Pakistan army chief in a letter. According to The News, in a trial conducted in July this year, Hasan was defended by an officer deputed by the Pakistan Military Court.

The hearing was held in Islamabad High Court
The father had complained that he was facing difficulties in meeting his son in the high-security jail of Sahiwal. Earlier in January, the Islamabad High Court had heard the case which had directed the sedition trial to be conducted under camera surveillance.

During the trial, the question was raised whether a civilian could be tried by a military court? This question was later referred by the court for a decision by the military authorities. It is worth noting that recently, Pakistan’s civil and military leadership were at loggerheads over the appointment of the Director-General of the country’s intelligence agency Inter-Services Intelligence (ISI).

After being sentenced, Hassan Askari has been shifted to Sahiwal High-Security Jail. He was convicted by a military court in July this year and no statement was issued by the army’s public relations department, but details were recently released by Hassan Askari’s father.

A Lahore High Court (LHC) Pindi bench has moved a petition seeking a transfer of the convict from Sahiwal Jail to Adiala Jail in Rawalpindi.

As being reported, the court has issued notices to all the parties concerned, including the Field General Court Martial, on the request. Hassan Askari was accused of writing a letter to General Qamar Javed Bajwa in September last year, allegedly extending his tenure and asking him to resign, expressing displeasure with the army’s policies.

Major General (retd) Zafar Mehdi Askari, the father of convict Hassan Askari, said in the petition that he had learned that his son was being tried in Gujranwala Cantonment where the Field General Court Martial convicted him and sentenced him to five years’ imprisonment.

The field petition also claims that Hassan Askari’s family was kept in the dark for several weeks after he was convicted, while the petitioner’s daughter also contacted the General Headquarters several times but there was no response. Not received According to the petitioner, Brigadier Wasim, posted at Jag Branch, was also contacted and said that Hassan Askari has been kept in Sahiwal High-Security Jail and despite repeated contacts by the jail authorities, he was only allowed to visit Hassan once. He is allowed to meet Askari.

The petition also pointed out that Hassan Askari was not being allowed to meet his lawyer. The petition also mentions that he had written a letter to the Ministry of Human Rights in August stating that since Hassan Askari’s parents live in Islamabad, the culprit was sent to a nearby jail in Rawalpindi. He should be shifted to Adiala Jail as the parents of the accused are old while the mother of the accused is critically ill and undergoes dialysis three days a week.

Liquor became expensive in UP since April 1, beer became cheaper