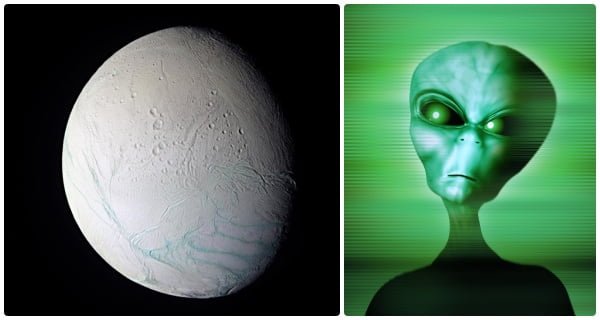 NASA: Alien life is possibly the widest, and yet the most uncertain research project ever taken up by mankind. While numerous probes and space researches are engaged in spotting potentially habitable worlds or trying to trace radio signals that might have been broadcasted by some ancient civilization on the other side of the universe, the more pragmatic and possible discoveries keep on coming time and again, as well. The latest is a study, published in the Nature Astronomy journal, based on the data recorded by the NASA Cassini probe from Saturn. According to the study, the data reflects a considerable possibility of alien life on Saturn moon, Enceladus.

According to the study, which featured five astronomy researchers, the Cassini mission found significantly large amounts of methane, a compound of carbon and hydrogen, in the plumes emanated from the surface of Enceladus. The satellite’s surface also hosts an unusually large amount of dihydrogen molecules and carbon dioxide as well, none of which are known to be synthesized in such significant quantities without being synthesized by a life form. The researchers note that if all conditions of life are held true based on what we know of it from Earth, then these discoveries may well be significant indicators that Enceladus may sport alien life in certain forms.

Microbes, which are present in billions on Earth, exist through anaerobic life processes, which cause them to add significant quantities of methane to the Earth’s atmosphere. These microbial life forms on Earth consume the atmospheric hydrogen molecules to eject methane, and if the terrestrial life processes hold true in Saturn too, it may well be a strong candidate to sustain life forms in certain ways. As it so happens, Enceladus has always been earmarked as a strong candidate for studies pertaining to the sustainability of extraterrestrial life forms. The moon features an ocean below the surface, which is covered by a layer of ice that traps heat inside, and may therefore sport conditions that could become favorable for life forms to flourish.

“We find that the observed escape rates cannot be explained solely by the abiotic alteration of the rocky core by serpentinization, are compatible with the hypothesis of habitable conditions for methanogens, and score the highest likelihood under the hypothesis of methanogenesis – assuming that the probability of life emerging is high enough,” the study states in its abstract. In simpler terms, while the presence of high quantities of methane is undoubtedly exciting, further and closer studies are required in order to truly understand whether Endeladus could indeed sustain life as we know it.