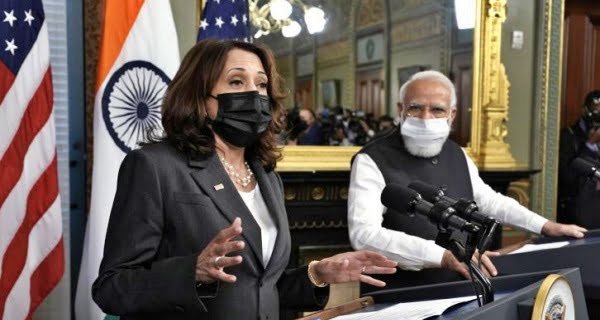 Washington: According to the news of the morning, the US tour of Prime Minister Narendra Modi has started today and met US Vice President Kamala Harris late Thursday night (Indian time). Both the top leaders also discussed Indo-US relations during this time, while many different issues of the world were also discussed. In these, the issue of Afghanistan was also prominently included, while Kamala Harris lashed out at Pakistan on the issue of terrorism.

New heights of relationship
During this very important meeting, Prime Minister Modi on his part expressed confidence that under the leadership of US President Joe Biden and Vice President Kamala Harris, India-US relations will now reach new heights. With this, PM Modi praised Kamala Harris and said, “You are an inspiration to many people in the world. The people of India would also like to honor and welcome you to this historic victory journey in India, so I especially invite you to visit India.”

The first meeting of both the leaders, know on which issues were discussed
It is worth noting that this was the first formal meeting between Prime Minister Narendra Modi and Kamala Harris, although before that the two leaders had talked on the phone several times. In this important meeting, there was also a big discussion about the situation of corona in India, vaccination, and the supply of health-related goods. At the same time, US Vice President Kamala Harris praised India’s resumption of vaccine supply during this period. Apart from this, Prime Minister PM Modi also told about the necessary steps being taken by India regarding climate change, in which the National Hydrogen Mission is also prominently included. Along with this, both these leaders also had a big conversation about the far future cooperation in the healthcare and IT sector.

Now eyes on Biden and PM Modi’s meeting
After this meeting, all eyes are now on the important meeting between Biden and PM Modi to be held today. According to Indian time today, PM Modi-Biden will have a bilateral meeting at 8.30 pm at the White House. It is known that Biden is going to host PM Modi for the first time after becoming the President and it is a matter of great happiness that the whole of America including Biden is welcoming PM Modi warmly.

12/10/2020/9:54:pm
Islamabad: There is political outrage in Pakistan these days. The entire opposition has united against Imran Khan and his allied Pakistani army. Not only...

18/06/2021/9:49:pm
Kolkata: Amidst the ongoing uproar in the BJP's state unit after the defeat in the West Bengal Assembly elections, a protest against party national...

Break on the investigation of Vyapam scam in Shivraj government, 16 FIRs were...

12/08/2021/3:33:pm
Bhopal: Now the brakes have been put on the investigation of the famous Vyapam scam of Madhya Pradesh. In the Congress government, 16 FIRs...