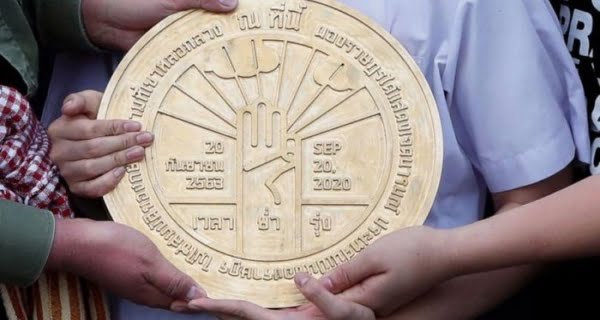 Bangkok: Less than 24 hours after anti-government protesters erected a plaque in honor of the Democracy’s struggle at the Rajshahi Maidan in Thailand, it was removed and officials termed the act illegal. A complaint was filed and a plaque was submitted as evidence. Police gave this information on Monday.

Thousands of Protestors gathered on Sunday in the capital’s historic ground Sanam Luang and this plaque was installed. This two-day demonstration is the biggest demonstration of this year and the protesters are demanding new elections and reform in the monarchy. An official of the nearby police station said that the government’s fine arts department and local administration lodged a complaint that the protesters destroyed the archaeological site and they ‘handed over the plaque to us as evidence.’

Superintendent of Police Warsak Pitsitbakorn said, “They are the agencies responsible for that area and it is a public site registered as an archaeological site.” He said, “They have reported the damage to us and we have to see what laws were violated.”

13/01/2021
New Delhi: The Income Tax Department has started the Faceless Penalty Scheme for cases related to the recommendation of penalties made under the faceless...

06/09/2020
Bhopal: A leopard has died after being hit by a train. The incident took place at 2:30 pm Saturday-Sunday in the Midghat railway line...

Trump’s claim – a big legal victory in Pennsylvania, will challenge another state

05/11/2020
Washington: US President Donald Trump has announced in a tweet that wherever his rival Joe Biden is ahead or winning, he will give a...

Palpalnews hub is your news, entertainment, technology, politics, and lifestyle website. We provide you with the latest news and videos straight from the best news providers of the industry.
Contact us: [email protected]palpalnewshub.com